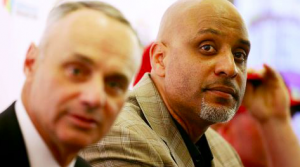 Mere hours before the previous collective bargaining agreement expired, Major League Baseball and the Players Union agreed to a new labor deal. Owners had floated the idea of a lockout vote if a new agreement wasn’t in place by midnight Wednesday night, and so the new CBA keeps in tact baseball’s more than two-decade run without a labor stoppage.

Negotiators from both sides worked for nearly 24 consecutive hours to get a deal done before the deadline. The new deal will be in place for five years, taking effect immediately and lasting through the 2021 season. More importantly, the agreement allows the offseason to carry on as scheduled, including next week’s Winter Meetings. Some teams have been hesitant to make moves before a new agreement was in place, preventing high-level free agents from signing, as they waited for the new CBA to be complete to see where the luxury tax threshold would fall. It’s now expected that many teams will be more willing to make moves.

A third point of contention in the deal was free-agent compensation, which has seen some changes. Qualifying offers may be extended to players, but no player can receive more than one in his career. Also, the team losing the free agent will only receive an extra draft pick if the player signs a deal worth at least $50 million. Starting next offseason, the team signing the player will not lose a first round pick. However, if that team is above the luxury tax threshold, they will lose a second round pick, fifth round pick, and $1 million from their international bonus pool.

One expected change that was not made involves roster size. There was speculation that rosters would expand to 26 players, but that did not happen. Rosters will remain at 25 during the season, and there was no change made to September rosters, which can still be expanded to as many as 40 players.

The regular season will also be extended by four days, beginning in 2018. This will give teams more off days. The two sides also discussed playing more day games for teams facing long flights immediately following a game. This should help lessen some of the strain on players over the course of the long season.

Details will continue to emerge in the days to come about the major and minor changes made during the new CBA. But an agreement has been reached and both sides appear to be satisfied with the final product. We now return you to your regularly scheduled offseason, which should kick into high gear with next week’s Winter Meetings.