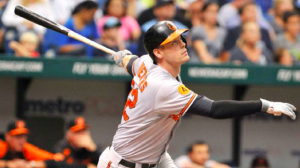 The free agency saga of catcher Matt Wieters has had an infinite number of twists and turns, and there’s still no end in sight. The latest development comes from Tommy Stokke, who reports that the Milwaukee Brewers have “emerged as a potential suitor” for Wieters. Milwaukee’s exact level of interest is unknown, but Wieters has had so much trouble attracting serious interest from any team this winter that any new contender being thrown into the mix is something to take seriously.

Milwaukee’s interest in Wieters appears to be a direct result of his price dropping at this late stage in the offseason. Naturally, Wieters was seeking a long-term deal at the start of the offseason, as most would have regarded him as the top catcher on the market. However, with spring training just a few weeks away, the cost in terms of both money and years that it’ll take to sign Wieters has dropped significantly, giving small-market clubs like the Brewers hope that they have a chance to sign him.

The Brewers have had a rather unsettled catching situation since they traded Jonathan Lucroy to the Rangers last summer. Earlier this winter, the Brewers also traded catcher Martin Maldonado to the Angels in exchange for catcher Jett Bandy. During spring training, the Brewers figure to hold an open competition among Bandy, Andrew Susac, and Manny Pina. None of those three is an established major league regular, and while the Brewers are certainly hopeful one will emerge as the answer behind the plate, Wieters would undoubtedly be an upgrade over all three.

With or without Wieters, the Brewers don’t appear to be in a position to compete for a postseason spot in 2017. However, if they can sign him to a one-year deal, he could help them to remain competitive during the first half of the season, and then the Brewers could look to use him as a trade chip in July. Milwaukee already has a rather impressive farm system, with eight prospects ranked in MLB.com’s top 100, but having a trade chip like Wieters at the trade deadline next summer could help the Brewers accelerate the rebuilding process.

For Wieters, accepting a one-year deal would be a huge let down and carry some risk if he has multi-year offers on the table. But it could also allow him to take another shot at the free agent market next winter with the hope that he’ll be able to attract more lucrative offers. Of course, Wieters would have to contend with Lucroy, Miguel Montero, and possibly Welington Castillo as other catchers on the free agent market next winter.

Before the Brewers became linked to Wieters, the Angels and Reds appeared to be the teams with the most interest in Wieters, with the Nationals, Rockies, Orioles, and a couple other teams still in the mix. The Rays have also been mentioned as a possible destination, as they look to add a power hitter. On the surface, the Brewers make more sense for most teams in terms of guaranteeing Wieters a starting job. Of course, if Wieters were to sign with a rebuilding team like the Brewers, he would have to be cognizant that he’ll likely be shopped at the trade deadline.

The Brewers emerging as a possible suitor for Wieters doesn’t exactly add clarity to the situation, although it does signal that his price has dropped to the point of small-market clubs becoming serious contenders to sign him. With the Brewers, Reds, and Rays all joining the pursuit of Wieters in recent days, his free agency saga remains one of the most fascinating storylines of the offseason. How the story ends is still anybody’s guess.