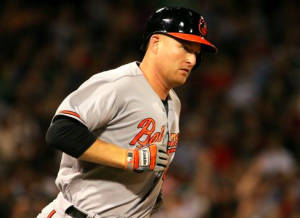 With the free agent market for power hitters at a virtual standstill, there is great uncertainty about where last year’s home run king, Mark Trumbo, will end up signing. The lack of clarity to Trumbo’s situation and his perceived drop in value appears to have brought more teams into the mix to sign him. Jon Heyman reported on Wednesday that the small market Oakland Athletics have reached out to Trumbo and expressed genuine interest in signing him, adding an interesting twist to his free agency saga.

The A’s getting involved for any high-priced free agent is always a surprise, but it’s less so in the case of Trumbo. Oakland reportedly made a serious offer to Edwin Encarnacion before he ultimately decided to sign with the Cleveland Indians, indicating that the A’s have the resources to go after the top free agents on the market. Before the Indians guaranteed Encarnacion a third year, he was reportedly giving serious consideration to Oakland’s offer. With Trumbo’s value likely dropping in a manner similar to Encarnacion, the A’s may be able to make a similar offer to Trumbo, giving them a legitimate chance to sign him.

Fresh off signing outfielder Rajai Davis on Tuesday, the A’s still have some money left to spend, a profound lack of power in their lineup, and a vacant DH spot, making Trumbo an ideal fit. At this stage in the offseason, if Trumbo received an offer from the A’s similar to what Oakland reportedly offered Encarnacion, he would have to seriously consider it. From Oakland’s perspective, this may be the perfect time to jump in and sign Trumbo, a player who would drastically change the look of their roster.

A few weeks ago, Trumbo looked likely to return to the Orioles, as the two sides had reportedly agreed on the framework of a four-year deal. The terms of that deal aren’t known, but it’s believed that it was worth in the area of $50 million. However, those talks didn’t progress and the Orioles ultimately pulled that four-year offer, breaking off talks with Trumbo.

Of course, after Encarnacion eventually signed for three years and $60 million, a four-year deal worth roughly $50 million sounds like fair market value for Trumbo. While Trumbo is younger than Encarnacion, he doesn’t have the track record that Cleveland’s newest slugger has for being one of the most consistent offensive players in baseball year after year. His age could help Trumbo secure a three-year deal, possibly longer, but receiving more than $60 million guaranteed seems unlikely.

Keep in mind that the Orioles and A’s are not the only two teams involved in the Trumbo sweepstakes. The Seattle Mariners have remained in contact with Trumbo’s representatives during the offseason, while the Colorado Rockies are also said to be monitoring Trumbo. The Cardinals and Rangers could also jump in for the right price.

The A’s, however, need to be taken seriously when it comes to Trumbo. Oakland was said to be interested in Encarnacion, and the A’s turned out to be a close second in that competition. In that sense, the A’s have a realistic chance to sign Trumbo, and one could argue that they could be considered the favorites to sign him. There doesn’t appear to be anything imminent with regard to Trumbo signing with any team, but it should be interesting to watch unfold in the weeks to come.