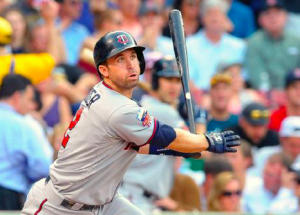 It’s been nearly two weeks since the Minnesota Twins asked every team with an interest in trading for second baseman Brian Dozier to submit their final offer, as they hope to bring the saga to a conclusion one way or another. However, there is still no conclusion, as the Twins have not traded Dozier, nor have they told the second baseman that he is staying in Minnesota.

The Los Angeles Dodgers have been the heavy favorite to trade for Dozier all along, as they have the biggest need at second base of all the interested teams, as well as the prospects to make a deal happen. However, the latest report from Ken Rosenthal indicates that talks between the Twins and Dodgers have reached “an impasse.” Minnesota is not satisfied with what the Dodgers are offering, and at the same time they are eager to let Dozier know what will happen to him one way or another out of respect for the five-year veteran.

Los Angeles has been consistent all along in making Jose De Leon, the team’s top pitching prospect, the centerpiece of the trade. Meanwhile, the Twins have been equally consistent in asking for more, as Minnesota has reservations about De Leon growing into a top-of-the-rotation caliber starter, believing that it’s far more likely he ends up pitching out of a major league bullpen. There’s no doubting that De Leon has great stuff and a high ceiling, but the Twins aren’t completely sold on him and would like another top prospect included in a trade for the second baseman who hit 42 home runs and posted an .886 OPS last season.

This game of chicken between the Dodgers and Twins has been going on for quite some time with no resolution. Of course, if both teams were being honest with themselves, they would be more motivated to reach a compromise and get the trade completed.

From Minnesota’s perspective, Dozier’s value will never be higher than it is right now, as he has two full seasons left on his contract on a team-friendly deal and is coming off a career year. Dozier could still be a valuable trade chip at the trade deadline this summer, so the Twins can always wait and trade him then if they’re not in contention. But if he gets hurt or struggles the first half of the season, his value will drop considerably. The only way for the Twins to guarantee they max out on Dozier’s trade value is to deal him right now.

For the Dodgers, they need a second baseman, and Dozier is the best available. If Los Angeles wants to remain on top of the NL West in 2017, they’d be wise to find the best second baseman available. Right now, internal options like Enrique Hernandez can’t make the Dodgers feel secure heading into the season. Even the recent signing of Cuban infielder Jose Miguel Fernandez doesn’t guarantee a solution at second base for 2017. With Los Angeles in win-now mode, they need to be willing to sacrifice an extra prospect or two to make the Dozier trade a reality.

While things between the Dodgers and Twins have stalled, there are other potential suitors for Dozier, including the Giants, Cardinals, and Braves. But none of those teams need Dozier as much as the Dodgers need him, meaning Los Angeles is still the favorite to get him, as they should be the most motivated to make a deal. However, the Twins aren’t going to keep Dozier in limbo forever, and it’s time for one of these teams (or both) to step up and either make a deal or walk away from the negotiating table once and for all.