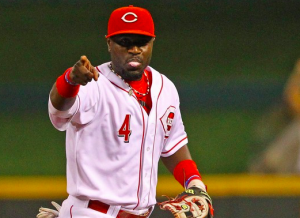 One day after reports surfaced that Cincinnati Reds second baseman Brandon Phillips nixed a trade to the Atlanta Braves earlier this winter, rumors indicate a deal may still be possible. Ken Rosenthal reported on Thursday that Phillips blocked a trade to the Braves in November, the third time he’s exercised his no-trade clause. However, Friday morning Jim Bowden reported via a source inside the Reds organization that a trade involving Phillips going to Atlanta is still a possibility.

Phillips, of course, is no stranger to trade rumors. The Reds tried to trade him to both the Nationals and Diamondbacks last offseason, although both trades were blocked. However, Phillips blocking a trade to Atlanta is a little more surprising, as he grew up less than 20 miles from downtown Atlanta and owns a home in the area, so it would make sense for him to want to return close to home at this stage in his career.

In terms of playing time, Phillips may also be better off going to the Braves in the final year of his contract. The Reds are even more eager to Phillips now than they were last offseason, as they want to free up space in their middle infield for Jose Peraza and Dilson Herrera. Even if Phillips stays in Cincinnati in 2017, the re-building Reds may not have a problem with forcing him into a supporting role to give Peraza and Herrera more of an opportunity. In fact, the plan appears to be for Phillips to take a backseat to the younger infielders.

By Rosenthal’s account, Phillips blocking the trade to Atlanta isn’t a matter of playing time, but rather “a matter of principle,” as Rosenthal puts it. Phillips appears to have an undisclosed issues with the Reds, and would like it to be addressed before he does them the favor of waiving his no-trade clause.

According to Bowden, a Reds executive admitted to him that the club had not followed through on promises made to Phillips. However, there appears to be some level of hope within the organization that the Reds and Phillips can work through their issues, satisfying Phillips enough to waive his no-trade clause.

Of course, if the Reds can get Phillips to waive his no-trade clause, would the Braves still be interested in trading for him? The proposed trade that would have sent Phillips to Atlanta was being discussed around the same time the Braves signed Sean Rodriguez to a two-year deal. Rodriguez figures to see plenty of time at second base while Atlanta waits for prospect Ozzie Albies.

With Rodriguez in the mix and Albies on the way, Atlanta has less of a need for Phillips. But the Braves, who are hoping to be competitive in 2017, would certainly welcome him, as he would provide a great veteran presence on a young, rebuilding team. Phillips, despite a decline in his home run power, also hit .291 with 11 homers and 34 doubles last season, so he can still be a productive big league hitter at age 35. However, Bowden insinuates that the Reds would have to pay most of his $14 million salary for 2017 to make a trade to the Braves happen.

At this point, it’s difficult to guess whether Phillips will end up being traded before the start of the season or not. A move to the Braves would appear to make sense for all parties, and despite the blocked trade earlier this winter, Bowden says a deal is still possible. However, there appears to be some issue between Phillips and the Reds that is holding up the works, and there’s no guarantee the two sides will be able to come to an understanding and finally make the trade of Phillips a reality.