MLB Trade Rumors: Is The Market for Chris Sale Dwindling? 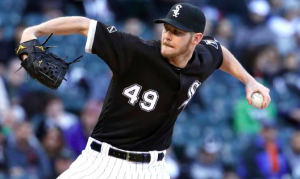 Just a few weeks ago, the Chicago White Sox appeared to have more than 10 suitors for ace Chris Sale, and it looked increasingly likely that he would be traded at some point this offseason. Last week, Sale’s suitors appeared to be whittled down to five teams that were ready to make a serious push for him. However, as the Winter Meetings get underway, the list of teams that are still pushing for Sale appears to be shrinking rapidly, putting into doubt whether he will get traded at all.

The Atlanta Braves were once considered the favorites to land Sale based on the state of their farm system. Nevertheless, they have reportedly told the White Sox that they will not include shortstop Dansby Swanson in any trade for Sale, which will make it difficult to get a deal done. The Braves also seem to have turned their attention to Chris Archer of the Tampa Bay Rays as an alternative to Sale. Of course, after trading for Jaime Garcia last week, Atlanta isn’t under any pressure to add to its rotation at this time.

The Houston Astros were another contender for Sale that appeared to have the pieces to land him in a trade. However, owner Jim Crane says the Astros are done making big moves after signing Carlos Beltran over the weekend. The Astros also appear unwilling to part with Alex Bregman, who would likely need to be the centerpiece of a trade package for Sale, much like the Braves would need to include Swanson.

The Texas Rangers also appear to be out of the Sale sweepstakes after being reported among the five finalists. Texas GM Jon Daniels said on Sunday that he’s not looking to make any blockbuster trades this winter. The Rangers also have a weakened farm system after the trades they made over the summer.

The Boston Red Sox were another team considered among the five finalists for Sale, but there has been little to connect them to Sale and the White Sox in recent days. Boston is reluctant to part with any of its young core of position players, and without doing so, they have little to no chance of being able to pry Sale away from the White Sox.

That leaves the Washington Nationals as perhaps the only team left with serious interest in acquiring Sale. The Nationals are simultaneously involved in talks with the Pittsburgh Pirates to acquire center fielder Andrew McCutchen, yet they believe there’s a chance they have the prospects to land both. That being said, the Nationals likely see Trea Turner as untouchable, much like the Braves and Astros view Swanson and Bregman, respectively, which could be a non-starter for the White Sox. There are also reports that the Nationals don’t want to part with outfield prospect Victor Robles, and acquiring either Sale or McCutchen, let alone both, without giving up Robles seems unlikely.

This potentially leaves the White Sox without a trading partner for Sale. There’s always a chance that one of these teams changes its lookout and gives the White Sox the prospect they want, or that a mystery team emerges out of nowhere to make a competitive offer for Sale. But as it stands now, it’s becoming increasingly likely that Sale will remain in Chicago.

The White Sox may have asked for too much and unintentionally turned teams away. If they intend to trade Sale this winter, and quite frankly, now may be the best time to do so, the White Sox may need to come down on their asking price, as the suitors for Sale appear to be shrinking fast.