MLB Trade Rumors: Yankees Not Giving Up on Jose Quintana 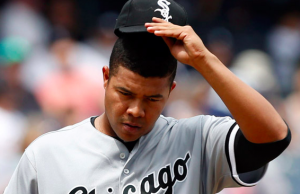 It’s well established that the New York Yankees have done nothing this offseason to improve their starting rotation, which if nothing else has some questions and uncertainty surrounding it. New York appears comfortable if it has to begin the season with its current contingent of starting pitchers in place, but the Yankees appear open to adding a starter before spring training gets underway if they can find the right deal.

The Yankees reportedly have a number of potential targets, the most notable of which is lefty Jose Quintana of the Chicago White Sox. Rumors linking the Bronx Bombers to Quintana have swirled for the past month and refused to die, in part because the Yankees have a collection of prospects that could persuade the White Sox to trade Quintana. According to a report released Tuesday, the Yankees have had “continued dialogue” with the White Sox about Quintana, indicating there’s still a chance for the Bronx Bombers to get him.

Of course, it’s well established that the price to trade for Quintana will be quite high, and for good reason. Quintana has four years left on a team-friendly contract and has been one of the most durable and productive pitchers in baseball over the last handful of years. In exchange for Quintana, the White Sox could ask for a bounty of prospects on par with what they received from the Boston Red Sox in the trade for Chris Sale. The Yankees just happen to be one of the teams with a farm system capable of meeting Chicago’s asking price.

“I think the most important currency to have nowadays is high-end prospects, and I think we — by everyone’s evaluation — have collected a number of those,” said Yankees GM Brian Cashman. “So I think we can easily do that. It’s just, will we do that? I think we’ll stay engaged in the marketplace, and over time, if we do match up favorably with anybody where we can get what we want and they get what they want, then yes, we’ll try to pull something down.”

Cashman didn’t mention Quintana specifically, but there’s no other pitcher who could be available for trade this winter who would cost as much as Chicago’s lefty. The Yanks GM also recognizes the irony in New York benefitting from the high cost of pitchers on the trade market over the summer when they dealt Aroldis Chapman and Andrew Miller and are now on the other side of the fence as they attempt to trade for a starter.

“We benefited from that at the Trade Deadline, but now, obviously, on the acquisition side of it, it’s very costly to do business as well,” Cashman said. “We’ll continue to evaluate it and stay engaged, but we’re prepared to go to Spring Training with the team we have currently if need be.”

Reading between the lines, Cashman’s comments seem to indicate that the Yankees aren’t making a hard push for Quintana, but remain engaged just in case they can get the White Sox to agree to a deal on their terms. Recent reports indicate that the Pirates and Astros are more active in talks with the White Sox, while Ken Rosenthal describes the Yankees as a “long shot.”

Nevertheless, the Yankees are at least recognizing their need to improve their rotation before the start of the season and making at least some effort to go after the biggest fish in the pond. New York certainly isn’t the favorite to trade for Quintana right now. But if Cashman and the Yankees wake up one day and decide they want him, there’s no doubting that they have the prospects to get him.