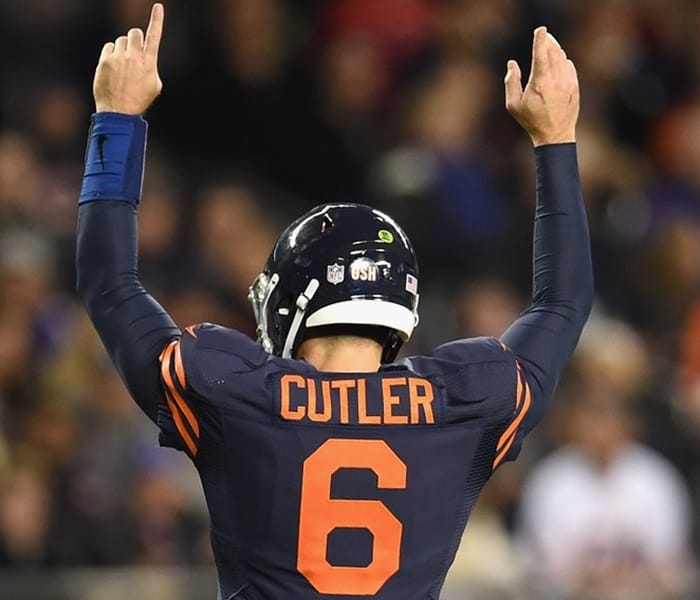 It appears that reality may be setting in for the Minnesota Vikings. They were supposed to be good this year, but then they lost Teddy Bridgewater and Adrian Peterson and expectations went from being relatively high to pretty darn small. The football loving free-world assumed they would stink without their two offensive stars, but then they traded for Eagles quarterback Sam Bradford and the craziest thing happened.

Somehow the offense looked decent—and they won five in a row. Hmmm…so maybe the Vikings will be good after all? Maybe–unless they aren’t.

Monday night, after the way they were dominated by the lowly Chicago Bears, it is probably safe to say this is not going to be “the season” for the Minnesota Vikings.

Fans were probably hoping that the last game against the Eagles was an anomaly; that their team would get it together against the lowly Chicago Bears and get back on track. The Bears had only won a single game, were having trouble fielding a healthy quarterback, and were forced to go with back-ups on the offensive line. Surely the superior defense of the Vikings could dominate such a lackluster team.

Right? That is unless the return of Jay Cutler actually provides a spark—and it did.

Cutler had been out since Week Two but was finally healed up, which was good since Brian Hoyer was out with a broken arm and Matt Barkley was ineffective last week. According to the rumor mill, Bears head coach John Fox was done with him, but like Cutler said—Fox didn’t have any choice.

As it turned out, it was a good choice.

Cutler got on the same page with his receiver early and had no problem picking apart the Vikings defense. Rookie running back Jordan Howard made it easier by running through the interior of the Minnesota defense for 153-yards and a touchdown on 26 carries.

He also had four receptions for 49 yards and a touchdown to make him only the second rookie Chicago Bears running back with 200+ yards from scrimmage in a game (he had 202). This put him in unique company as the only Bears rookie running back (and the youngest) to gain 200+ yards from scrimmage in a single game other than Gale Sayers (1965; 202 yards and six touchdowns).

The Bears defense did their part by keeping Vikings quarterback Sam Bradford from finding any rhythm and sacking him five times and recording nine hits on him. Of course, it helps that Minnesota’s running game is a complete joke. Defenses know they don’t need to worry about the Vikings running game so they can focus on stopping the pass.

It’s starting to appear as if injuries to the offensive line may be catching up with the Vikings. During the first five weeks of the season, they only gave up eight sacks, scored 23.8 points a game, and averaged 4.9 yards a play. Against the Eagles and Bears, they scored just 20 points, gave up 11 sacks and 26 hits on the quarterback, gained a league-low 4.0 yards a play, and allowed 12 tackles for a loss.

It’s hard to get much accomplished on offense with statistics like that.

As the offense gets worse, the pressure on the Vikings defense is going to grow. Even the best units have their breaking point. Eventually, after doing their best to give the offense every chance possible to score and seeing them fail time and time again, it becomes harder to get the job done.

Why kill yourself trying to dominate the other team when your offense can’t move the ball?

Minnesota will try to get back on track next week with a home game against the Detroit Lions. The Bears will have a week off before flying to Florida to take on the Tampa Bay Buccaneers.