Monday night’s game between the Arizona Cardinals and New York Jets in Arizona found both teams at a crossroads and desperately in need of a win. With a loss to the Rams already on the books and a trip to Seattle coming up, the Cardinals needed to get one to keep up with the Seahawks.

For the Jets—while their situation looks bleak, with two and a half months of the season left to be played, anything can happen. But for “anything” to be good, they have to start playing decent football. So far this season, they have had a hard time doing so. Against the Cardinals Monday night, the effort the Jets turned in can be described as many things—but good is not one of them. 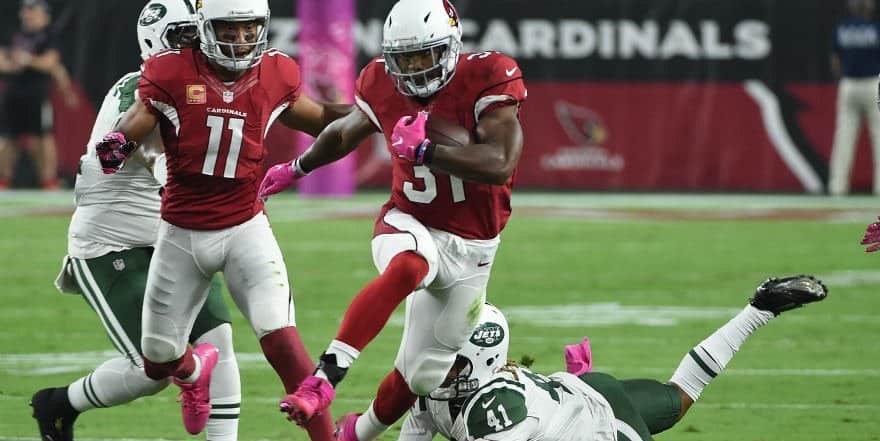 New York’s strength was supposed to be its run defense, but that was certainly not the case in Arizona. The unit had taken over the top spot following Green Bay’s dismal display against the Dallas Cowboys and had only been giving up three yards a carry and 68.4 yards a game.

David Johnson nearly had that on one run in the first quarter, a 58-yard touchdown scamper for the Cardinals first points of the first quarter this season. He would go on to have 111 rushing yards on the day and become the first person to rush for three touchdowns against the Jets since LeSean McCoy did in 2011.

With Johnson playing so well, the Jets needed to respond with some offense of their own—but they just couldn’t do it. Four of their seven drives in the first half were three and outs. Somehow they managed to generate 130 yards of offense and put three points on the board.

The second half wasn’t any better. After another three and out, the Cardinals went on a 14-play drive that ate up over half the quarter and ended with Johnson’s third rushing touchdown of the day. On the Jets next drive, it looked like they might answer the touchdown with one of their own, but then Fitzpatrick threw an interception to D.J. Swearinger in the end zone.

Geno Smith was visibly agitated with his team’s offensive struggles and clearly wanted a chance to do better than Fitzpatrick. With a little over half of the fourth quarter left to play he got it following Arizona’s fourth touchdown of the day and behind 28-3.

At first, there appeared to be hope. He started off with a nice 17-yard completion to Quincy Enuwa, but then seven plays later he gets sacked and fumbles the ball. One of his linemen recovered it, but on the next play, he threw an interception to Tyrann Mathieu.

There was a very good reason why the Jets wanted Fitzpatrick back, and Smith reminded people what that reason was in his one drive Monday night. However, if the Jets are going to at least make games competitive this season, they will need to do something at quarterback. However, there is no reason to think Bryce Petty or Christian Hackenberg can do any better.

So—does that mean the Jets are stuck with what they have? Absolutely not. Thy can always pick someone up off the street or trade for someone, but they are not likely to do either. If Smith and Fitzpatrick are benched, the team will likely give Petty a chance.

He certainly can’t do much worse than the other two—but for now, it appears that head coach Todd Bowles is sticking with Fitzpatrick. So if the Ravens defense is available in your fantasy league, get a waiver claim submitted.