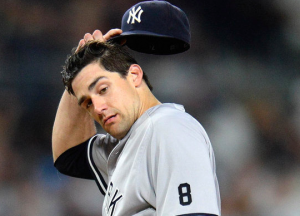 New York Yankees pitcher Nathan Eovaldi received a large helping of bad news on Tuesday. The 26-year old righty will require not one, but two surgeries on his right elbow. Tests revealed that Eovaldi tore his flexor tendon off the bone in addition to having a partial tear of his ulnar collateral ligament. Fixing the issues will require two separate surgeries, one of which is Tommy John surgery. It will be the second time Eovaldi undergoes Tommy John.

Eovaldi last pitched last week Wednesday when he started against the Boston Red Sox, only to be removed after one inning due to elbow pain. “It wasn’t a particular pitch or something like that,” Eovaldi explains. “I just felt a little pinch every time I threw a fastball. After the first inning, my velocity was down a little bit, but I didn’t feel like there was anything to really worry about. But then I got the MRI, and when I got the results, I was really surprised to see that I had torn the flexor tendon off the bone and damaged my UCL.”

The Yankees put Eovaldi on the DL on Friday and Tuesday he learned his unfortunate prognosis. “It’s a huge blow,” Eovaldi said. “It’s my second one, so it’s a big deal. Hopefully everything goes well with the surgery and I work hard to get back.” Eovaldi previously had Tommy John surgery in high school when he was 17. The rehab from a second Tommy John surgery is usually longer than for those experiencing it for the first time, potentially up to 18 months. Eovaldi says doctors have advised him to be “a little more safe” than he was during his first Tommy John rehab.

Between the second Tommy John surgery and the surgery for his flexor tendon, Eovaldi is likely to miss the entire 2017 season and may not return to the big leagues until 2018. Doctors have reportedly told Eovaldi that he could return in time to pitch as a reliever towards the end of 2017, but he says such a scenario is “pretty much out of the question.” He understands that things will be different than they were when he had the surgery for the first time nine years ago.

The question now becomes what team Eovladi will be playing for when he returns to the mound in 2018. He has one more year of arbitration before he reaches free agency; however, if he’s not going to pitch next season, the Yankees are likely to non-tender him, making him a free agent right away. It’s possible he may not have a team while he goes through the recovery process next year.

Another possibility is the Yankees or another team signing him to a multi-year deal through at least the 2018 season, most likely with a low base salary since he won’t be on the mound at all next year, and even 2018 isn’t a guarantee. This would give him more supervision during his rehab and give the team that signs him good return on investment if Eovaldi can come back strong in 2018.

There are few pitchers who have come back from two Tommy John surgeries, and most are relief pitchers, which may not be a bad career move for Eovaldi. At age 26, some team will be willing to take a chance on Eovaldi, even after his past elbow problems, as he’s shown plenty of flashes of being an above-average big league pitcher. However, starring down the barrel of a second Tommy John surgery, Eovladi’s future in the big leagues is far from certain.