Posted on December 2, 2016 by Bryan Zarpentine 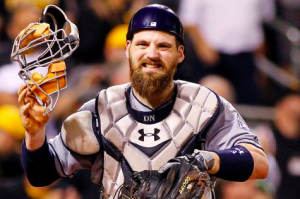 It’s not the major move the Washington Nationals are expected to make at some point this offseason, but the reigning NL East champs did pull off a trade on Friday. The Nationals acquired catcher Derek Norris from the San Diego Padres for pitching prospect Pedro Avila. The trade is a homecoming of sorts for Norris, who was originally drafted by the Nationals in 2007. He was one of Washington’s top prospects in 2011 when he was traded to the Oakland Athletics in the trade that gave the Nationals Gio Gonzalez. Washington pitcher A.J. Cole also went from the Nationals to the A’s in the deal, only to end up back with the Nationals.

The acquisition of Norris solidifies Washington’s catching situation for next season. It all but ensures what most suspected, which is that the Nationals will not try to re-sign Wilson Ramos, who may not be ready for the start of 2017 because of the torn ACL he suffered late in the season. Norris will join Jose Lobaton and Pedro Severino as Nationals backstops, although Severino could be sent back to the minors for more seasoning or used as a trade chip.

The Nationals are likely expecting Norris to become their primary catcher next season, although that may not be written in stone just yet. Norris is coming off the worst offensive season of his career. Despite tying his career-high with 14 home runs, Norris hit just .186. Even with that power, his OPS was a disappointing .583.

Of course, Norris, who will turn 28 in February, is young enough to get things back on track. Lobaton isn’t exactly an offensive force either, and Severino doesn’t have enough of a track record in the majors, so Norris should still be looked at as the favorite to be Washington’s primary catcher in 2017.

The addition of Norris is also likely to take the Nationals out of the running for any of the catchers on the free agent market. In addition to Ramos, Matt Wieters is the most intriguing name available, although Dioner Navarro, Jarrod Saltalamacchia, and Nick Hundley could also fill a need for teams. Of course, the Nationals are still in the running to acquire Pirates center fielder Andrew McCutchen.

The Padres, meanwhile, don’t give up much by trading Norris, as his was considered a non-tender candidate. He has two years of arbitration left before free agency and is expected to make close to $4 million in 2017. San Diego is hoping that Austin Hedges will finally take the reigns behind the plate after putting up impressive numbers at triple-A the past two seasons. The Padres also have Christian Bethancourt as an option behind the plate. Bethancourt showed signs of life in a backup role last year, although the Padres may not want to rely on him in a starting role if Hedges still isn’t ready.

In Avila, the Padres are getting a young, live arm who’s years away from the majors. He’s undersized but throws hard and had success in low-A ball as a 19-year old in 2016, so he’s well ahead of the curve in terms of age. He adds another talented arm to an already impressive farm system.

Considering the fact that the Padres weren’t likely to use Norris in 2017 anyway, this is a no-loss trade for them. As for the Nationals, they didn’t give up much for Norris, but there is also no guarantee he provides the solution they’re looking for behind the plate, especially after the vast amounts of production Ramos provided for them in 2016.