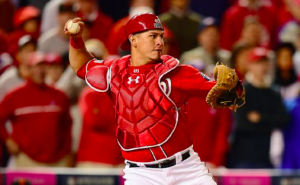 The Washington Nationals had their fears confirmed Tuesday afternoon when catcher Wilson Ramos was diagnosed with a torn ACL that he suffered during Monday’s game against the Arizona Diamondbacks. Ramos suffered the injury while trying to catch a relay throw in the 6th inning. He was eventually helped off the field, unable to put any weight on his right leg. An MRI taken Tuesday revealed a torn ACL, meaning Ramos will miss the rest of the season, including the playoffs.

Ramos suffered the injury in the same knee where he suffered an ACL and MCL tear in 2012, making this a repeat injury for the 29-year old, who was in the midst of the best offensive season of his career. After a disappointing 2015 season, he had become an important piece of the puzzle for the Nationals. On the season, Ramos is hitting .307 and has set career highs in home runs (22), doubles (25), and RBIs (80).

“I feel badly because you know how we all feel about Wilson,” said manager Dusty Baker after Monday’s game when he suspected the injury to Ramos was serious. “But it’s part of the game. You hate [for] it to happen this late, right before the playoffs, but our next step is try to figure out a way to play without Wilson. I’ve been mixing and matching this year and most of my life. Therefore, it’s another obstacle and I just got to try to go back to the drawing board and figure out something.”

With Ramos unavailable, the Nationals will likely turn to Jose Lobaton to be their primary catcher. In a mere 91 at bats this year, Lobaton is hitting .220, as he offers little offensively and is a huge drop off from Ramos. Pedro Severino is another option, although he has just 24 major league at bats and put up modest numbers in triple-A this year. The Nationals have also called up Spencer Kieboom to give them a third catcher for the rest of the regular season.

Washington would be in good shape to survive the loss of Ramos if not for the fact that the Nationals already have several players dealing with injuries. Second baseman Daniel Murphy has not played in a week due to a strained buttocks. Right fielder Bryce Harper is allegedly dealing with a shoulder injury. He recently hurt his thumb as well, an injury that will reportedly keep him out for at least a few days. There is also uncertainty whether Stephen Strasburg will be able to return from an elbow problem in time for the playoffs. With Ramos added to the injured list, four of Washington’s most important players are currently on the shelf.

“My dad told me, ‘Don’t say what else can go wrong, because something else can go wrong,'” Baker said about the team’s rash of injuries. “I’m thinking, ‘What else can go right?’ I don’t think like that. I don’t allow myself to think like that. Those thoughts come into everybody’s head, but you’ve got to dispel them and try to figure out a way to get out of this mess. And who knows? Somebody else might step up and be the hero, the least likely of people. That’s how I think.”

The Nationals have already clinched the NL East and know they will play the Los Angeles Dodgers in the NLDS, although which team will have home-field advantage in the series remains up in the air. The absence of Ramos, and potentially others, will undoubtedly have an impact on Washington once the postseason begins, making it more difficult for the Nationals to advance to the NLCS for the first time since the franchise moved to Washington.