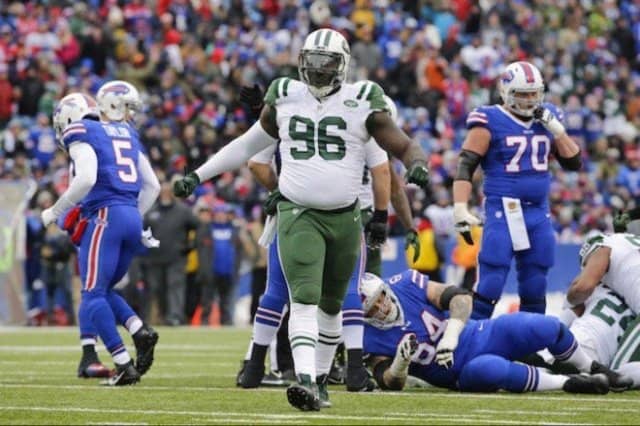 No one saw this deal coming. There was no reason to expect that it would. The Jets front office had barely spoken with Muhammad Wilkerson about a long-term deal. They did have some talks, of course, but nothing to the extent that there was any reason to believe they would sign him before the 4 PM cutoff on July 15–but they did.

Wilkerson will now average $17.2 million a season making him the second-highest paid defensive lineman in the league behind Ndamukong Suh and $100,000 in front of Fletcher Cox and $200,000 in front of Olivier Vernon.

“I give my all every Sunday on the field and play with so much love and passion for the game,” Wilkerson said on Twitter. “I’m thankful for everything that comes my way and proud to say I’m back on the green and white for a few more years.”

At the beginning of the week, there was no reason to think the Jets and Wilkerson would come to an agreement. According to media reports, the Jets sent a deal to Wilkerson’s agent Wednesday night that they found intriguing enough to consider. Talks continued on Thursday and ramped on Friday as the deadline approached.

With time running out, talks progressed quickly, and a deal was made in the nick of time.

So—how does this save the Jets season? Without him, they still would have a solid defensive front, but with him, it will be even better. However, there was no reason to think he would have skipped the season if a long-term deal was not reached.

Under the franchise tag, he would have counted $15.701 million against the Jets salary cap. Before Wilkerson’s new contract, the Jets only had about $2.9 million in cap space. However, by giving him a hefty signing bonus and loading up the other four years of his contract, the Jets can pay Wilkerson a number he likes and create some much-needed cap space to eventually sign Ryan Fitzpatrick.

Just like there was little reason to expect a deal with Wilkerson, there is no reason to think one will be made with Fitzpatrick. The two sides have not been able to come close to an agreement. Fitzpatrick has said he’d rather sit out than take what the Jets have offered.

However, he is a smart guy. From the information that has been public, there is no reason to think Fitzpatrick has any option at this point other than the Jets. If he wants to play and get paid at all, it will likely have to be with them.

The Jets have made it seem as if they are okay with heading into the season with Geno Smith back at quarterback. They have tried to make it sound as if he now ready to be a legit starting quarterback in the NFL—which is what you would expect them to say in the media.

However, when the preseason starts, they will not be able to hide the truth. If he is—great. Good for him and good for the Jets. But there is little reason to believe Smith will be as good as they are trying to make him out to be.

Fitzpatrick isn’t a stud quarterback by any means, but he will give the Jets a much better chance of winning than Smith will. So when the truth becomes a reality, the Jets will have to do what it takes to bring Fitzpatrick back. At that time, he could try to hold the Jets up for as much as possible or maybe the reality of his own market value will finally set in and he’ll agree to something reasonable.

Wilkerson’s cap hit is expected to be about $10 million which will give the Jets another $5.7 million in space. So if/when the Jets and Fitzpatrick return to the table, thanks to Wilkerson’s new deal they almost have enough cap space to sign Fitzpatrick to a number he can be happy with.

Fitzpatrick will not make the Jets a Super Bowl contender, but he will make them good enough to be interesting.