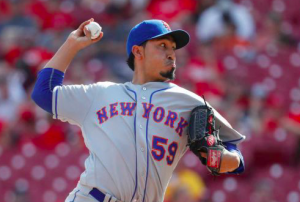 For much of the offseason, the New York Mets have been on the lookout for bullpen help, but have been reluctant go go ahead and make a move. On Friday, they finally acted, signing a pair of veterans in Fernando Salas and Tom Gorzelanny. Salas rejoins the Mets on a one-year deal worth $3 million plus incentives. Meanwhile, Gorzelanny signed on a minor league deal with an invitation to spring training.

The Mets originally acquired Salas last August in a trade with the Angels. In 17 appearances with the Mets, he posted a 2.08 ERA, with opposing hitters batting just .177 against him. Those numbers were far better than what he posted with the Angels earlier in the season and the best Salas has performed since he saved 24 games for the Cardinals in 2011.

Despite being susceptible to giving up the long ball throughout his career, Salas has been a perfectly competent reliever for many years. After he helped solidify the backend of their bullpen late last season, the Mets are hopeful Salas can do the same for the entire 2017 season.

Salas became the team’s 7th inning setup man last season, and he has a chance to carve out a similar role this year, with closer Jeurys Familia handling the 9th inning and Addison Reed the go-to reliever in the 8th inning. Of course, Familia is likely facing a suspension at the state of the year after being arrested for domestic violence last fall. The charges were ultimately dismissed, but it’s likely MLB will suspend him for part of the season. Salas is likely to take on a more important role while Familia is suspended.

Meanwhile, the signing of Gorzelanny is more of a low-risk move by the Mets. The 34-year old lefty made just seven appearances in the big leagues last season, giving up seven runs in three innings of work. In 2015, Gorzelanny made 48 big league appearances, posting a 5.95 ERA, so it’s possible he’s at the end of his major league career. Nevertheless, the Mets are giving him a chance to see if he can still be a useful lefty specialist. He will compete against fellow lefties Josh Edgin and Josh Smoker during spring training for a spot in New York’s bullpen.

With the addition of a lefty like Gorzelanny, even on a minor league deal, it perhaps points to the Mets losing hope in a reunion with lefty Jerry Blevins. However, reports surfaced soon after the additions of Salas and Gorzelanny indicating that the Mets still have interest in re-signing Blevins. The Mets have also been linked to reliever Sergio Romo, who presumably remains a possibility for New York along with Blevins, even after the signing of Salas.

Adding a pitcher like Salas is a solid but unspectacular move by the Mets. He figures to be an important part of the bridge between the team’s starters and their most prominent relievers like Reed and Familia. But he’s not going to be someone the Mets put in high-leverage situations on a regular basis. Signing him is a nice start, but if the Mets fancy themselves as a World Series contender, adding Blevins, Romo, or a comparable late-game reliever is something they’ll have to do before the start of the season.