No. 17 Arkansas At No. 21 Auburn Preview—Ready For Some Fireworks?

A month ago it would have been a piece of cake to pick a winner between the Auburn Tigers and Arkansas Razorbacks. Auburn had not looked great to start the season. To be fair, the losses were to a pair of pretty good schools (Clemson and Texas A&M). The defense was okay at best, and the offense was too inconsistent.

To start the season, Arkansas looked like a team breaking in a new starter at quarterback—because they were. They still had a good running game and the defense wasn’t bad—but the lack of consistency cost them against Texas A&M and nearly cost them against TCU.

A month later and both teams look much different than they did at the start of the season. 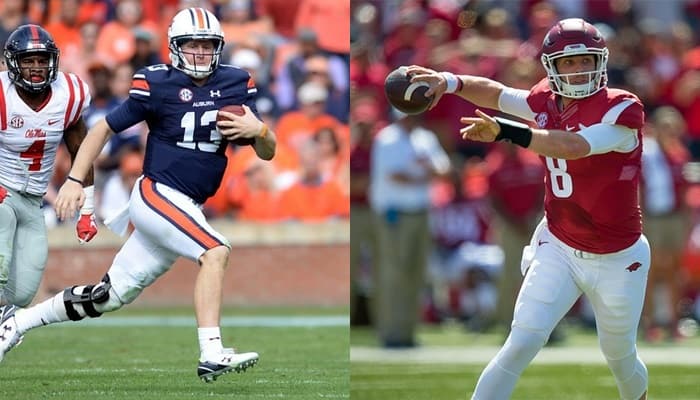 Arkansas quarterback Austin Allen has seven games under his belt and is looking more and more comfortable with each passing week. Having one of the ten best-running backs in the nation in Rawleigh Williams III has certainly helped.

Auburn’s Sean White has improved dramatically as well. He’s gone from completing 47.6 percent of his passes against Clemson in the season opener to 77.8 percent against Mississippi State in his last game. Like Allen, he’s been the beneficiary of the nation’s N0. 12 running game powered by the tandem of Kamryn Pettway and Kerryon Johnson.

Neither defense is bad, but neither can be called great. So when the two meet Saturday night, who will come out on top? It all depends on whose stars have the bigger game.

On paper, it appears that Auburn has a pretty tough defense having given up just ten touchdowns all season, but they have yet to play an offense as dynamic as Arkansas. Clemson’s didn’t play great in the season opener, Texas A&M struggled to finish drives and kicked five field goals, and LSU’s offense was underperforming when they played.

Arkansas, on the other hand, has given up more points but has played better offenses than Auburn has (Alabama, Ole Miss, TCU; both have played Texas A&M). Considering who they have played, having given up 398 yards a game so far this season is not bad.

Considering how well both offenses have played, it is not hard to see this game turning into a defensive coordinator’s nightmare. Arkansas may be able to handle Sean White, but can they do so and stop Kamryn Pettway and Kerryon Johnson? Probably not.

At the same time, it is not hard to see Austin Allen having a great day against the Auburn defense and Rawleigh Williams III running wild as well.

Vegas currently has Auburn as a 10-point favorite, and on paper that looks pretty fair, but Auburn has not had to deal with the level of competition Arkansas has at this point in the season. Since Arkansas joined the SEC in 1992, Auburn leads the series 12-11-1. Last year’s game was a barn burner that saw Arkansas pull out the win after four overtime periods, 54-46 (ESPN).

Look for this one to be a barn burner as well and don’t be surprised if the team that scores last wins.