No. 2 Ohio State At No. 8 Wisconsin Preview—Time For The Badgers To Earn A Seat At The Table (if they can)

There is nothing wrong with being “good.” Wisconsin will be looked upon as at least being a good team whether it wins or loses Saturday against Ohio State. But if the Badgers want a shot at greatness, they have to do what no one else has done this season, and only one team did each of the last two seasons. 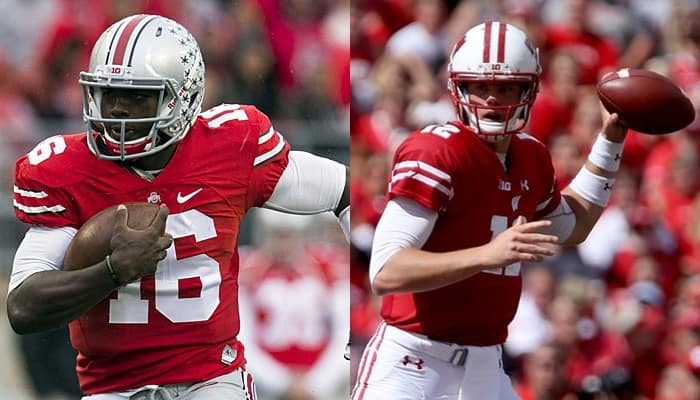 It’s a task that is easier said than done of course, but if you want to approach greatness, taking down Goliath is what you have to do. As it turns out, the Badgers may have the stones needed to get the job done. As strange as it may sound, the key to the game for the Badgers will be to force Ohio State to put the game on the arm of quarterback J.T. Barrett.

Crazy, right? He’s completing over 60 percent of his passes. Sounds like the kind of guy that has the potential to light defenses—and he has, just ask Bowling Green (21-31 for 349 yards and six touchdowns with one interception). But that is the only team he has lit up. Tulsa and Oklahoma both held him to around 150 yards. Last week, Indiana held him to just 93 yards and a 42.9 completion percentage.

To be fair, you can look at the Tulsa and Oklahoma games and chalk the lack of a passing game up to the success of the running game. That, and the Buckeyes trying to kill the clock when the game was already well in hand—but then how do you explain the Indiana game?

Ohio State is averaging 326 yards a game on the ground this season and 6.37 yards per carry. Wisconsin has allowed just 90 yards a game and 3.1 yards per carry. If the Badgers can slow the Buckeyes down to something closer to what they have been giving up all season, they might have a chance to pull off the upset.

That is if they can manage to score some points—something that is easier said than done against Ohio State. The Buckeyes are allowing just 10.8 points a game this season (second best in the nation). However, as impressive as that number is, the Buckeyes haven’t exactly played the best competition. Oklahoma is supposed to be good, but after losing to Houston and barely holding on to beat TCU and Texas it’s not hard to wonder if they really are any good.

Other than the Sooners, the most serious competition Ohio State has faced is Indiana—Indiana!

The Buckeye defense is good, but it is hard to say how good when you consider the lack of quality competition on their schedule. So maybe—just maybe—the Badgers might have a chance.

If Wisconsin had a better passing game, it would be easier to believe they could complete the upset. But after Alex Hornibrook’s performance against Michigan last week (9-25 for 88 yards, a touchdown, and three interceptions), it is hard to imagine the Badgers passing for much against Ohio State.

For Wisconsin, it will all come down to how big the holes are for running back Corey Clement and how well he runs through them. They have to do what they do best, and keep the ball out of the hands of J.T. Barrett as much as they can. At the same time, they have to do something with the ball when they have it—but Ohio State has yet to allow a rushing touchdown all season.

So—can Wisconsin do it? Can they take down Ohio State? Of course, they can (key word—can), but will they?

Don’t bet on it. The Badgers are not well-rounded enough, and Ohio State simply has too much talent on both sides of the ball.