No. 23 Florida State At No. 10 Miami Hurricanes Recap—Rivalry Renewed With A Familiar Kind Of Ending

At one time, the Florida State-Miami rivalry was one of the best in college football. The games were always close, came down to the wire, were decided in dramatic fashion, and had an impact on the national championship. But then Miami fell on hard times and Florida State’s program began to rise making the game less competitive and a lot less interesting.

However, after the latest edition of the game, it is safe to say the rivalry is back and once again relevant. 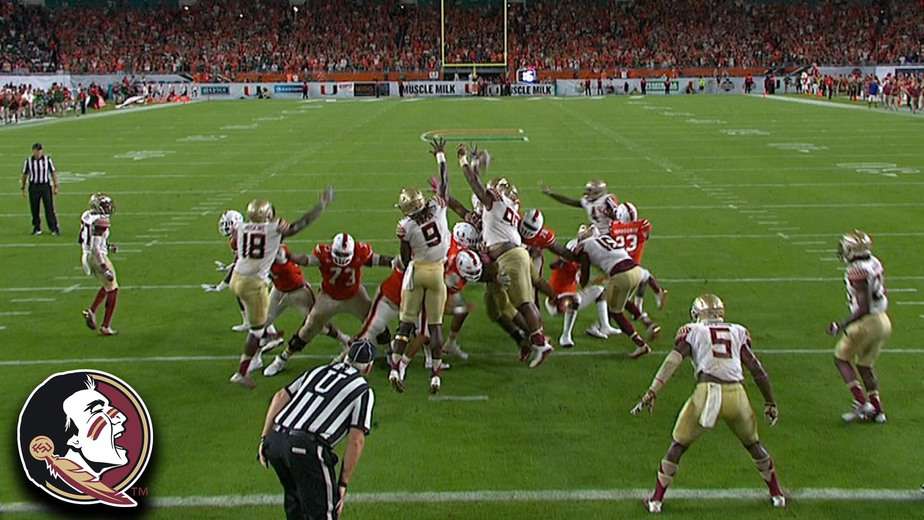 Should Miami win out and beat Clemson for the ACC Championship, they could still make the playoffs. If they don’t, it will be because of Saturday night’s loss to the Seminoles; a game that was decided once again by a missed kick.

Rather a blocked one.

Unlike the five occasions Florida State lost because of a missed kick, the victim, this time, was Miami (Hurricanes lost in 2005 because of a blown hold). A Braxton Berrios punt return gave Miami possession at the Florida State 16 with a little over three minutes to play.  Four plays later, Brad Kaaya hit Stacey Cole with an 11-yard touchdown pass to close the gap to one.

All Miami had to do was make the extra point attempt, keep Florida State from scoring with 1:38 left on the clock. As it turns out, it was easier said than done. Senior defensive end DeMarcus Walker blocked the attempt allowing Florida State to hold onto a one-point advantage. Miami opted to kick deep on the ensuing kickoff and count on its defense and three timeouts to leave them enough time for one more chance (ESPN).

But the defense couldn’t stop the Seminoles from gaining the two first downs they needed, and Miami lost, 20-19. It is the seventh consecutive time the Hurricanes have lost to Florida State and the first time by a single point.

Miami placekicker Michael Badgley had not missed an extra point attempt since his freshman season, a streak of 72 attempts. Coincidentally, his last miss was a block at the hands of Florida State in 2014.

Miami had gone the entire season without ever being behind in a game, and it was looking good for the Hurricanes when they took a 13-3 lead into the half. But the Hurricanes couldn’t contain Dalvin Cook who had 209 total yards on the night (150 rushing, 59 receiving). Tack on their inability to run the ball themselves (62 yards; had been averaging 235 yards a game), and for the third year in a row, they lost a lead in the second half against the Seminoles.

For Florida State, the win gave them a sense of redemption after having lost the week before when North Carolina connected on a 54-yard field goal as time expires. They face Wake Forest next.

Miami will have a tough time getting back on track when North Carolina comes to town next week. It will not get any easier the following week when they face Virginia Tech.