Hopes were high for both Ole Miss and LSU before the 2016 season started. The Rebels had a Heisman contender in quarterback Chad Kelly and enough firepower behind him to make this Ole Miss’s year in the SEC. Many also believed LSU running back Leonard Fournette could win the Heisman while leading the Tigers to the national title game.

Well—none of that is going to happen now. 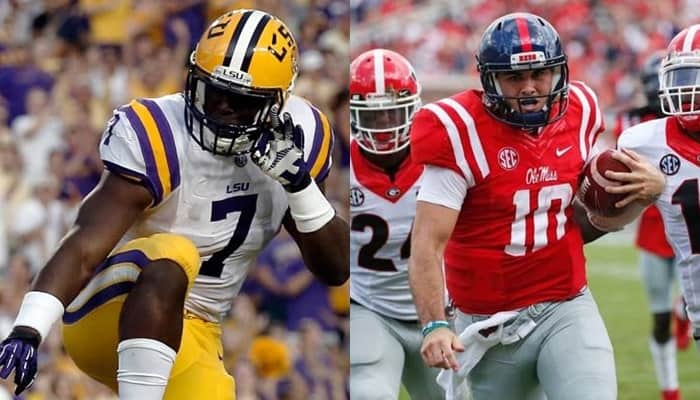 Chad Kelly has played well, but he and the Ole Miss defense have been inconsistent. They should have beaten Florida State, made too many mistakes to beat Alabama, and Arkansas just outplayed them. LSU’s loss to Wisconsin, narrow win over a mediocre Mississippi State team, and loss to Auburn resulted in Les Miles being shown the door. If injuries hadn’t severely limited Fournette, things could have one better.

But he was—and now the team’s defensive line coach, Ed Orgeron, is the interim head coach.

So yeah—the season hasn’t gone like either team thought it would. It can, however, get on track for Ole Miss with a win over the Tigers. The Rebels will be the first competitive team Ed Orgeron has faced since taking over for Miles a few weeks ago. A win now could go a long way towards helping him get the job after the season ends.

Ed Orgeron has been around the coaching block a few times and knows he is in a pretty good position. The offense wasn’t bad under Miles and Cam Cameron (who was also fired). It just didn’t utilize its players as well as it could.

The strength of their game is in the rushing attack. Leonard Fournette is one of the best in the business and will be picked high in the draft next year. When he is gone, the run game will not miss a beat when Derrius Guice takes over.

However, while LSU’s run game is stellar, its passing game has suffered—that is, until they started utilizing play-action a lot more. It makes perfect sense. Teams will always be looking to stop the run first. So if they play-action fake can get the secondary to bite for even a moment, that may be all the receiver needs to get open.

It worked like a charm against Southern Miss. Danny Etling completed 6-11 play-action passes for 197 yards and two touchdowns (of 80 and 63 yards).

Ole Miss is weak against the run and will struggle to stop Fournette and Guice, which will make them susceptible to getting beat bad on play-action passes.

The best chance Ole Miss as to win is to outscore LSU. Chad Kelly needs to go nuts and pick apart the LSU secondary like a kid going after all the marshmallows in the Lucky Charms box. The Tigers give up about 200 yards passing a game, but they haven’t played anyone even remotely close to Chad Kelly’s caliber.

Throwing the ball well and ending early drives with points will be key for Ole Miss. If they can do just that, they may be able to force LSU to pass to catch up. If LSU is forced to play catch-up, they will be limited in how they can use their two best weapons, Fournette and Guice. It will be a tall task for Ole Miss to accomplish, but if they can, they just might be 4-3 come Sunday morning rather than 3-4.

LSU still has a number of tough games ahead against ranked teams (Florida, Alabama, Arkansas, Texas A&M). If Ed Orgeron wants to get the job when the season is over, he’ll need to win more than he loses. He’s off to a good start with wins over Missouri and Southern Miss. Adding Ole Miss to the list wouldn’t hurt.