The Naval Academy knew it had a tough one on their hands with the Houston Cougars coming to town. Greg Ward Jr. is not an easy guy to slow down let alone stop, and if they didn’t figure out how to do so, he would have a field day against them. But how do you stop such a dynamic playmaker from ripping your defense to shreds?

Easy—you keep him off the field as much as possible. 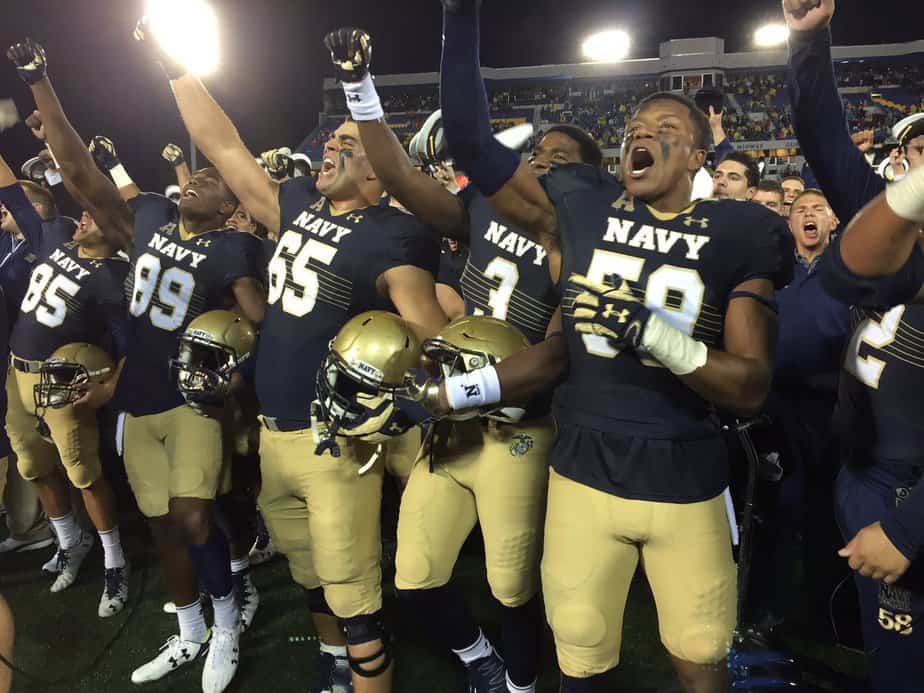 As a triple-option team that runs the ball the vast majority of the time, Navy could keep Houston’s offense off the field if they could get theirs going. There was just one problem. Houston happened to have the No. 1 run defense in college football and allowed only 42 yards a game. A week after being held to 57 yards on the ground by the No. 2 run defense in the country (Air Force), it didn’t look good.

Vegas didn’t have much faith in the Midshipmen and made them 17-point underdogs against the Cougars.

But in this case, the oddsmakers couldn’t have been more wrong.

Houston’s top-ranked defense had no answer for Navy’s running game and gave up 306 yards. In the previous five games this season they gave up a total of 210 yards. Tack on three turnovers—one returned for a touchdown–and a bad snap on a punt that resulted in a safety and you have the ingredients for an upset.

“We didn’t play very well in any phase of the game, and we still had a chance to win it there in the fourth quarter,” Houston head coach Tom Herman said. “You’re not going to win very many games against really good teams on the road turning the ball over three times, one for a touchdown, snapping the ball over the punter’s head and letting them rush for 300 yards.”

The Cougars have had issues all season with slow, sloppy starts, but were able to get it together in the second half and pull away from teams—but not this time. They began the second half with a fumble on their opening possession which gave Navy a short field.  Six plays later the Midshipmen scored to take a 27-20 lead.

Fans were not worried. They have seen their team down by a touchdown before. But on their next possession, Greg Ward Jr. was intercepted by Josiah Powell again. This time, he returned it 34-yards for a touchdown giving Navy a 34-20 lead.

Houston appeared poised to make a comeback when they closed the gap to eight points following a Dillon Birden touchdown run. The defense pitched in by forcing a turnover on downs, but then the offense failed to do anything with the ball on the ensuing drive and was forced to punt. But the snap ended up sailing out of the back of the end zone giving Navy a 10-point lead, 43-33.

But Houston wasn’t done yet.

Houston attempted an onside kick, but Navy recovered the ball. This time, the defense held, but Navy was able to kick a field goal and take a 13-point lead. The Cougars responded with a 13-play touchdown drive to cut the gap to six points with 1:57 left.

But with no timeouts they had to recover an onside kick if they were going to have a chance—and they didn’t. Navy failed to gain a yard, but they got the clock down to nine seconds before they had to punt.

So Houston got to attempt a lateral play, but it didn’t work.

The win is Navy’s first over a top-ten team since 1984. Their 46-points was the most the school has ever scored against a ranked opponent. In honor of the win, the Naval Academy Superintendent canceled classes on Tuesday.

“This one hurts, but we still have everything in front of us,” Herman said. “Our goal, as it is each and every year, is to win our conference championship and go to a New Year’s Six bowl game. We have an opportunity to continue that journey.”