No. 9 Tennessee At No. 8 Texas A&M Recap: No Miracle Comeback For Tennessee This Time

When you make a mistake, you are supposed to learn from it. If you don’t, there is an excellent chance you will make the mistake again—like Texas A&M did against Tennessee. In the season opener against UCLA, the Aggies became very conservative on offense in the second half and failed to do enough to hold onto the lead. As a result, the Bruins were able to mount a comeback and force the game into overtime.

Saturday afternoon they did the same thing against Tennessee. After taking a 28-7 lead with a touchdown on their opening drive of the second half, the Aggies became conservative just like they did against UCLA. Much like UCLA, the Volunteers chipped away at the A&M defense, wore them down, and eventually tied the game up at 35-35 with less than a minute left in the game. 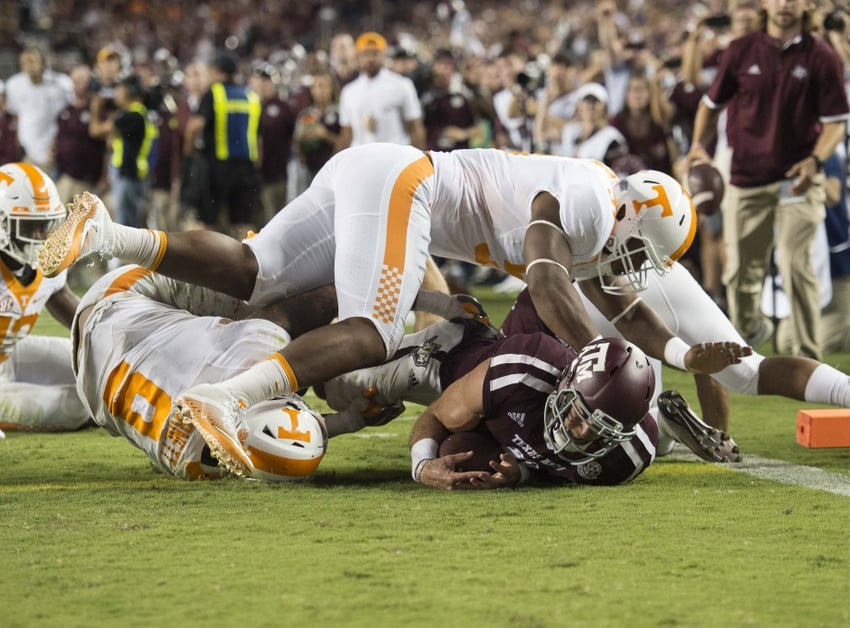 After pounding away at the Aggies defense on the ground and through the air, the stage was set for another miracle finish for the Volunteers. But after a valiant effort in the second half, it looked like it was going to be all for nothing after Trevor Knight got the Aggies in a position to attempt a game-winning 38-yard field goal.

But A&M’s kicker missed it—so on to overtime they went.

They were still tied after one overtime period, so they had to play another. At this point, A&M fans had to be hoping the result would be just like it was against UCLA—and it was. On what appeared to be the same play he scored the game-winner against UCLA, Knight took the ball over from a yard out to give the Aggies a 45-38 lead. On Tennessee’s first play, Joshua Dobbs was intercepted by Armani Watts.

Any win is a good win, and many in the media proclaimed the Aggies a legitimate contender after taking down Tennessee. However, while the defense made the plays they needed to, in the end, the unit still gave up a school record 684 yards to the Volunteers. Had they not forced seven turnovers (five fumbles and two interceptions) this one could have gotten real ugly for the Aggies.

The seven turnovers were the most for an A&M defense since 2005; the five fumbles were the most since 1997. The last time Tennessee lost so many was in 1996.

That fact was not lost on A&M head coach Kevin Sumlin who was able to put his team’s play into perspective after the game:

“The big takeaway from this was we were able to withstand some things, not play great but make enough plays to win the game without some of our better players being 100 percent.”

Texas A&M has a week off before they face Alabama. To beat the Crimson Tide, they will need to have Trayveon Williams to have another day like he did against the Volunteers, 217 yards and a touchdown on 28 carries ( a new single-game record for a Texas A&M true freshman).

But he can’t allow the ball to be punched out right before he crosses the goal line.

Trevor Knight turned in a good night overall with 349 yards of offense (239 passing, 110 rushing) and three touchdowns (two passing, one rushing), but he will need to be better than a 50 percent passer (17-34) and can’t throw two interceptions and still expect to beat Alabama.

As for Tennessee, while the loss has to be disappointing, the Volunteers showed tremendous resolve in overcoming a 21-point deficit in spite of all the turnovers. Should they commit as many next week when they face Alabama, the outcome is not going to be pretty.