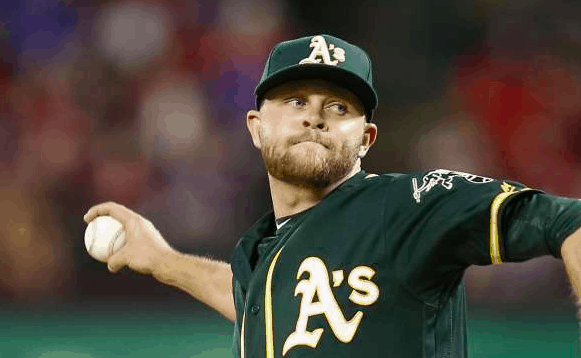 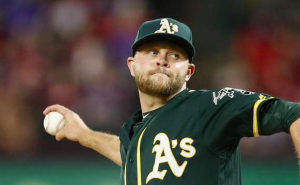 After just one time through their starting rotation this season, the Oakland Athletics are ready to make a change. The club announced Sunday that rookie Raul Alcantara was being pulled from the rotation after just one start. He’ll be replaced by Jesse Hahn, who will take over a spot in Oakland’s rotation starting Thursday when the A’s close out a series against the Kansas City Royals.

In his start against the Texas Rangers on Thursday, Alcantara lasted just two innings, giving up eight runs on four hits, including two home runs. He also walked two batters and hit another. That one start was all the A’s needed to see from the 24-year old Dominican before deciding a move to the bullpen would be what’s best for both him and the team.

“This gives Raul a little bit of a break; that was a tough one for him,” A’s manager Bob Melvin told reports Sunday. “Now one start and out of the rotation, that’s kind of difficult. As with us, these things often flip out. We’re trying to play a hot hand.”

Alcantara struggled in five starts he made for the A’s last September, going 1-3 with a 7.25 ERA. However, he held his own during spring training and managed to edge out Hahn and others for the final spot in Oakland’s rotation. However, Melvin believes that Alcantara’s secondary offerings aren’t as sharp as they need working out of the rotation. The A’s want Alcantara, who said he’s “fine” with the move to the bullpen, to work on those secondary pitches while in the bullpen.

“Every now and then he will throw a really good splitter or a really good changeup or a breaking ball,” Melvin said. “It’s the consistency with it that he’s lacking right now, and that could come pretty quickly for him. We’ve always thought he was a heck of a prospect for us and we still think that.”

As for Hahn, he threw six innings Thursday in relief of Alcantara, giving up two runs on seven hits, which was enough to move him back into the rotation. Before being sidelined with an elbow injury, Hahn started 16 games for the A’s in 2015, posting a 3.35 ERA and proving he could have success in the big leagues.

However, he spent 2016 bouncing between Oakland and triple-A, ultimately making just nine starts for the A’s, going 2-4 with a 6.02 ERA. Despite being relegated to the bullpen after spring training, Hahn will now get a chance once again to prove himself as a starter.

“It came down to the wire for that fifth spot”, Melvin said. “Jesse was part of that. He’s pitched a little bit better. Now it wasn’t to start a game, but these things can flip around. But as of right now Jesse will start in Kansas City.”

Hahn got roughed up during the spring, posting a 8.80 ERA over 15.1 innings, which cost him a spot in the rotation. But after a solid outing in relief Thursday, he feels he’s ready to rejoin Oakland’s rotation.

“That outing was good for me,” Hahn said of his six innings against the Rangers. “It did give me a little bit more confidence. I have to find that within me and take that same approach out there when I’m starting. Really, that’s just going to be up to me. I always wanted to be in the rotation. I’m definitely more comfortable starting a game, so I’m pretty pumped about it.”

Hahn figures to get more than one start before the A’s consider making another change, but there’s no guarantee he sticks in Oakland’s rotation long term. Ace Sonny Gray began the season on the DL with a lat injury, but the A’s are hopeful he’ll be back by the end of April, at which point someone will have to move out of the rotation to make room.

Hahn could very well spend the next couple weeks battling with Andrew Triggs and Jharel Cotton to avoid being the starter who gets bumped when Gray returns. But for now, Hahn has a chance to pitch as a starter after the A’s made an early-season change to their starting rotation. For some, the move may be a little rash, but the A’s can only succeed this season if their young rotation succeeds, and so Oakland can’t afford to have a long leash with its young starters.