The Oakland Raiders came into the season with high hopes, and at the midway point of the season, it appears that they just might live up to them. That is if they can keep playing lackluster teams like the Tampa Bay Buccaneers. Even though they outgained the Buccaneers 626-270, the Raiders needed nearly the entire overtime period to get the best of the Buccaneers.

With less than two minutes to go in OT, Derek Carr connected with Seth Robert for a 41-yard touchdown to give the Raiders the win, 30-24. 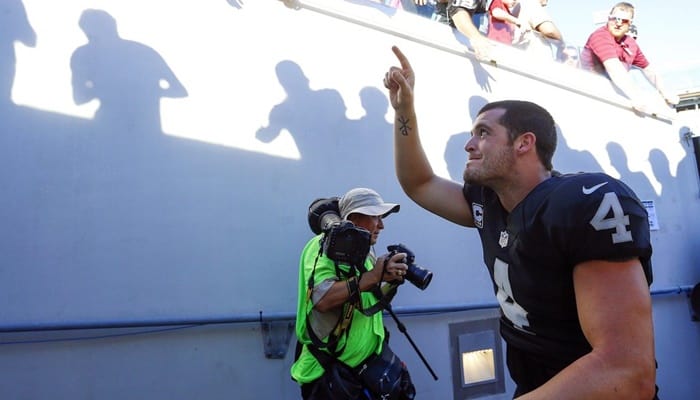 Carr ended up having a record setting day by completing 40 of 59 passes for 513 yards, a new franchise record and the 9th highest passing yard total in NFL history. He is also only the third quarterback to throw for 500+ and four touchdowns without throwing an interception.

Had that been the only record they set, the game would not have gone into overtime, and the score would be a little more lopsided. With 23 penalties for 200 yards, the Raiders are now the proud owners of the record for most penalties in a single game and the third-largest single game penalty yard total in NFL history.

While the yardage total alone is alarming, many of them had an impact on the outcome of the game. There was a delay of game on a first and goal play with the ball at the one. A touchdown was called back due to a pass interference call. They committed four penalties on Tampa Bay’s final scoring drive including two for having 12 men on the field—and then they only had nine on the field for the two-point conversion attempt!

Mistakes like that are ridiculous, but they were not the only ones the Raiders made throughout the game.  A Derek Carr fumble late in the first quarter gave Tampa Bay a short field. Three plays and 34-yards later, the Buccaneers took a 10-0 lead when Jameis Winston connected with Russell Shepard on a 19-yard touchdowns pass.

Sebastian Janikowski had a chance to win the game with a 50-yard field goal attempt to end regulation, but the kick was wide left. Kicks from 50+ yards are difficult to make, and for his career, Janikowski has made over half of his kicks from midfield and beyond. But when he got another chance during overtime on the Raiders first drive he pushed a 52-yard attempt wide right. 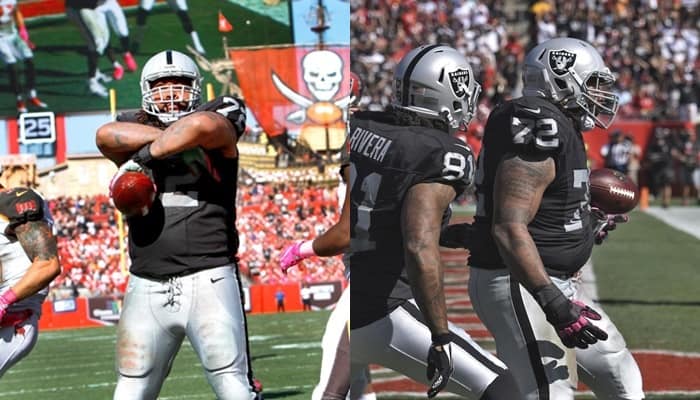 When a big man scores–he strikes a pose.

Had the Raiders played a team better than the Buccaneers he would have tied Phil Simms for the third highest passing yard total in a loss (Dan Marino with 521 yards against the Jets on October 23, 1988).

But they didn’t play a better team—they played the Buccaneers and won. In the process, they made another piece of history by becoming the only team based in the Pacific time zone since the NFL/AFL merger in 1970–other than the 2011 San Francisco 49ers—to win five games that started at 1 PM.

More importantly, they improved their record to 6-2 on the year and 5-0 on the road (a first since 1986), a statistic that bodes well for their playoff hopes. Oakland is the 46th team under the current playoff format to start the season with five consecutive road wins. All 45 made the playoffs, something the Raiders haven’t done since the 2002 season (they ended up losing to the Buccaneers in the Super Bowl).