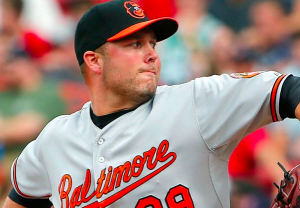 The Baltimore Orioles have added a familiar face for their September playoff chase. The Orioles announced Sunday morning that they have signed reliever Tommy Hunter to a major league contract. Hunter was released by the Cleveland Indians earlier this week, freeing him up to sign with any team, and he chose to reunite with the Orioles.

Hunter came to Baltimore at the trade deadline in 2011 as part of the same trade with the Texas Rangers that also gave the Orioles first baseman Chris Davis. He stayed with the Orioles until last year’s trade deadline when he was traded to the Chicago Cubs. During the offseason, Hunter signed a one-year deal with the Indians. After the Indians chose to release him rather than activate him from the DL earlier this week, Hunter is now back with the Orioles and pitched an inning during Baltimore’s win over the New York Yankees on Sunday.

Cleveland’s decision to cut ties with Hunter was an interesting one, as he had posted a 3.74 ERA in 21 appearances this season. However, Hunter had been on the DL since the middle of July with a back injury. He was told last week that he would be activated, but the Indians had a change of heart and decided they would rather keep their current bullpen intact and use Hunter’s spot on the 40-man roster to promote younger players in September.

The Orioles did waste much time before signing Hunter, who was greeted warmly when he stepped into Baltimore’s clubhouse on Sunday, as he was a popular figure during his roughly four-year stint with the Orioles. “There was a slip, a fall, a break of the back, three offseason core surgeries and a few things that happened,” Hunter said about all that has happened since he left the Orioles last July. “There was a lot of things that happened to get me back to this spot. It’s come full circle and, to be honest with you, I couldn’t be happier.”

Orioles manager Buck Showalter said he “Felt fortunate to add him at this time of year,” citing his experience against other AL East teams. With staff ace Chris Tillman and reliever Darren O’Day on the DL, the Orioles could certainly use added depth in their bullpen. Hunter was thrown into the fire immediately, throwing a scoreless inning Sunday in a game that snapped Baltimore’s three-game losing streak. With the win, the slumping Orioles remain in control of the second wild card spot in the American League, although they continue to trail the Toronto Blue Jays by three games for the to spot in the AL East.

Hunter may not move the needle much in terms of Baltimore’s postseason hopes, but a team can never have too much pitching, especially this time of year. Perhaps most importantly, Hunter is a pitcher who’s familiar to the Orioles and someone who genuinely wants to be in Baltimore. “There were a lot of memories here. A lot of lasting memories, not only for me, but for my family as well,” Hunter said. “Baltimore is special to me, my family, it’s always going to hold a special place. Walking back through the doors and seeing all the faces I just saw makes you smile pretty big.”