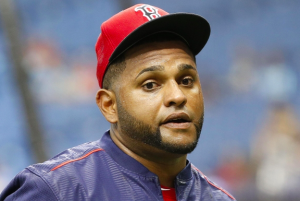 Perhaps no individual benefited more from the moves the Boston Red Sox made during the Winter Meetings than third baseman Pablo Sandoval. Following a disappointing 2015 season during his first year in Boston and a 2016 season in which he missed almost the entire year due to injury, Sandoval has much to prove to himself, the team, and Red Sox fans. But after the moves Boston made over the past week, the path is clear for Sandoval to become the team’s primary third baseman and get a shot at redemption.

When rumors that surfaced earlier this offseason about the Giants being open to a reunion with Sandoval turned out to be exaggerated, it was clear the man known affectionately as Kung Fu Panda would be staying with Boston. Then, with Travis Shaw being traded in the deal that landed the Red Sox reliever Tyler Thornburg and top prospect Yoan Moncada being included in the trade for Chris Sale, there’s little standing in Sandoval’s way when it comes to being the every day third baseman in Boston next year, something that wasn’t so clear with Shaw and Moncada still in the picture, especially after an ultra-disappointing two seasons in Boston.

The good news for the Red Sox is that Sandoval appears to have recognized that he’s fallen off a cliff career wise. “My career had fallen into an abyss because I was so complacent with things that I had already accomplished,” Sandoval told ESPN in an article published on Thursday. “I did not work hard in order to achieve more and to remain at the level of the player that I am and that I can be.”

He also appears to be taking steps to rectify the situation and get things turned around. Pictures have surfaced this offseason of Sandoval looking as thin as he’s ever been, as he appears to be in good shape heading into 2017, as he looks to resurrect his career. Sandoval credits the shoulder injury and the subsequent rehab for helping to reignite his passion for the game, prompting him to get in shape and prepare himself for next season after taking just six at bats (four of which were strikeouts) in 2016.

“I have been following a really strict routine that has taken a lot of dedication from my part,” Sandoval explains. “It has not been easy to wake up every single day at 6:30 in the morning to then head to the gym and start a full day of work. But you have to have that kind of dedication if you want to achieve the goals you have set for yourself.”

With Shaw and Moncada elsewhere, utility man Brock Holt, who started 11 games at third base last season, may be the only player who can challenge Sandoval for playing time at the hot corner. Nevertheless, Sandoval is carrying the attitude that he will have to earn his spot back and earn back the respect of the organization and its fans. “I am not taking anything for granted,” he said. “I am here to work hard. I’m not thinking about the position or not. I am starting from scratch, and I am here to show what I can do on the field.”

The Red Sox, of course, don’t know what to expect from Sandoval in 2017, although they are obviously encouraged by news that he’s gotten himself into good shape and appears to have a good attitude. What the Red Sox do know is that Sandoval has a chance to make a positive impact next season, as they may need him to help make up for the production they won’t be getting from the now retired David Ortiz. The Red Sox (intentional or not) have cleared a path for Sandoval to be their primary third baseman in 2017, and he appears excited and ready for his shot at redemption.