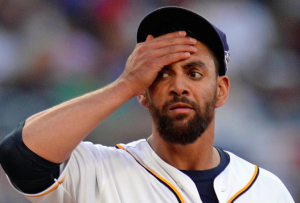 After missing nearly the entire 2016 season with a shoulder injury, San Diego Padres starting pitcher Tyson Ross is now set to undergo surgery to treat thoracic outlet syndrome, a condition that involves the compression of nerves around the neck and shoulder. Ross will undergo the surgery Thursday in St. Louis days after watching his brother, Joe, pitch for the Washington Nationals in the NLDS. With a recovery time of 4-6 months, there’s hope but no certainty that Tyson Ross will be ready for the start of the 2017 season.

Ross was San Diego’s opening day starter in 2016 after emerging as one of the team’s best pitchers in 2014 and 2015. However, it would end up being his only start of the season. Within days, Ross was placed on the DL with shoulder inflammation and never made it back to the big leagues the rest of the season despite several rehab efforts.

In late August, Ross did get to the point of making a minor league rehab start. However, he gave up four runs in less than an inning of work in that rehab start and continued to complain of shoulder discomfort. Ross has sought several medical opinions on his shoulder, and he and the Padres have finally decided to go ahead with surgery to treat thoracic outlet syndrome, an injury that is becoming more and more common among big league pitchers. The surgery will be performed by Dr. Robert Thompson, who is considered the leading expert on thoracic outlet syndrome.

Current Kansas City Royals pitcher Chris Young is one of the best examples of a pitcher who underwent thoracic outlet surgery and returned to pitch effectively in the big leagues. Young underwent the surgery in 2013 and was MLB’s Comeback Player of the Year in 2014. In 2015, he was part of Kansas City’s rotation when they won the World Series, prompting the Royals to sign him to a two-year extension last offseason.

New York Mets ace Matt Harvey also underwent surgery for thoracic outlet syndrome earlier this year. After struggling for the first half of the 2016, Harvey had the surgery in July and is now expected to be ready for spring training next season.

Ross is entering his final season of arbitration in 2017, and while he’s expected to receive close to $10 million in salary, the Padres will likely tender him a contract. Based on his performance in 2014 and 2015, and the fact that he’s having the surgery with enough to recover before the start of the 2017 season, the Padres will risk paying him $10 million, even after he missed most of 2016.

If Ross is able to come back from the surgery healthy and pitch well in 2017, the Padres could potentially use him as a valuable trade chip next summer to help them rebuild. San Diego could also attempt to sign him to a long-term deal if they believe Ross can continue to be a key part of the rebuilding process.

Either way, Ross is set for free agency following the 2017 season, giving him plenty of incentive to come back healthy and pitch well next year. Of course, not enough is known about how pitchers come back from thoracic outlet syndrome to guarantee that Ross will be the same pitcher he was before the injury. Only time will tell, as both Ross and Harvey will be interesting pitchers to watch in 2017, as the baseball world continues to learn more about thoracic outlet syndrome.