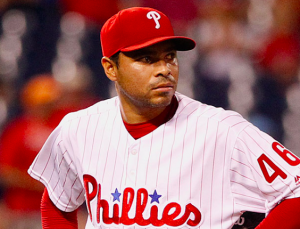 One game into the 2017 season, the Philadelphia Phillies are 1-0 and technically tied atop the NL East with the Mets and Nationals. However, despite their opening day win over the Cincinnati Reds, there is a dark cloud hanging over the Phillies early in the season, and it’s coming from their bullpen.

Specifically, the concern is for closer Jeanmar Gomez, who got the save on opening day despite giving up a two-run home run to Scooter Gennett. Gomez’s shortcomings on opening day, even on the heels of an excellent spring, has the Phillies wondering if he’s their long-term solution at the back of the bullpen.

“I’m concerned,” Phillies manager Pete Mackanin said about Gomez following Monday’s win. “I had two guys up in the ‘pen in that ninth inning. He’s just not getting the ball down the way he did when he was successful. I want to make sure that he gets opportunities, but at the same time, I don’t want to let games slip away. He has to execute. Like I said, for me, he’s earned the right to be the closer for right now. But he’s got to get the ball down.”

Gomez surprisingly emerged as the team’s closer last season and ended up having an impressive year, saving 37 games in 43 opportunities. However, he was dreadful late in the season, posting a 19.13 ERA in September. A poor finish to last season and Monday’s almost blown save appears to have Gomez on thin ice, as Mackanin was close to pulling him from the game before he got the final out of Monday’s game.

“It’s very tricky,” Mackanin said about situations that would warrant removing his closer in the middle of an inning. “Like I said, he’s earned the right to have the opportunity to be the closer. But at the same time, just because a guy is a closer doesn’t mean you can’t take him out of the game when he’s getting the ball up.”

Philadelphia’s bullpen was one of the worst in the National League last season despite Gomez emerging as a reliable closer for much of the year. However, the relievers helping to set up Gomez’s save on opening day all pitched well, perhaps indicating that the Phillies have other options for the closer’s role.

Before Gomez entered the game on opening day, Joaquin Benoit, Edubray Ramos, and Hector Neris all contributed a scoreless inning out of Philadelphia’s bullpen. Benoit is a veteran with some experience as a closer, while Ramos and Neris are both coming off impressive campaigns in 2016. The Phillies also added Pat Neshek to their bullpen over the winter, giving them another veteran option.

“I like what I saw from Benoit, from Neris, Ramos has the stuff to be a closer, Neshek I haven’t seen enough of. But I certainly have options,” Mackanin said about the possible alternatives to Gomez in the closer’s role. “I don’t want to make too big of a deal out of it, but I owe it to the team to do what I think is best for the team.”

The Phillies aren’t expected to compete in 2017, but if they are going to surprise people and remain in contention in the NL East, it’s going to be because of their pitching, including their bullpen. If Gomez continues to have rough outings, it wouldn’t be surprising to see Mackanin make a change early in the season. There already appears to be serious concern about him, and at least for the time being, the Phillies need to try to win every game they can, which could put Gomez in jeopardy of losing his job after just one game.