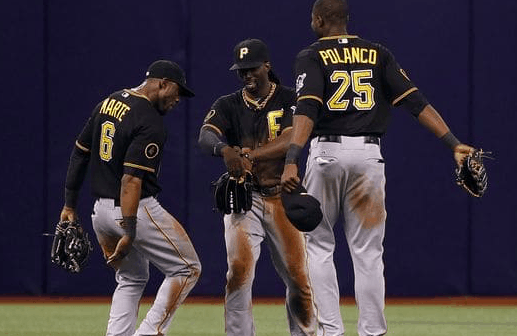 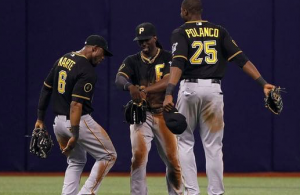 Aside from all the trade rumors about Andrew McCutchen, which ultimately went nowhere, and the uncertainty surrounding Jung Ho Kang for his off-field trouble, it was a relatively quiet offseason for the Pittsburgh Pirates, who made no significant changes to their roster. After three straight trips to the Wild Card Playoffs, the Bucs took a step back in 2016, finishing five games under .500 and 25 games out of first place in the NL Central. However, there may be reasons to believe the Pirates can be playoff contenders in 2017.

Behind Cole, the Pirates have a slew of young and promising pitchers, including a couple who have the talent to be frontline starters in Jameson Taillon and Tyler Glasnow. Taillon is definitely setup for a breakout season after posting a 3.38 ERA in 18 starts as a rookie in 2016. Glasnow didn’t quite establish himself last season, but he got his feet wet in the majors and has the kind of stuff that could allow him to eventually usurp Cole at the top of the rotation.

The Pirates also have quite a bit of depth in their rotation. For starters, Ivan Nova re-signed with the team, providing a veteran presence to stabilize the backend of the rotation. The Pirates also have a trio of youngsters in Chad Kuhl, Steven Brault, and Drew Hutchison who can help fill out their rotation. Hutchison will be particularly interesting to watch this year. He failed to establish himself in parts of four seasons with the Blue Jays, but he once held great promise and is still just 26 years old, so the move to Pittsburgh could give him new life. He’s a potential x-factor for the Pirates this season.

The Pirates were solid in the bullpen last year, although things could be different after trading away Mark Melancon last summer. Tony Watson is poised to remain in the closer’s role after saving 15 games in 18 opportunities in August and September last year. Of course, that’s the extent of his experience as a closer, which could prove problematic for the Pirates as he takes over in that role for a full season.

In front of Watson, the Pirates have a slew of veterans who are well accustomed to pitching out of a major league bullpen, including Juan Nicasio, Antonio Bastardo, and Jared Hughes. That group should be solid, and some of their rotation could depth could find its way to the bullpen if necessary, but overall Pittsburgh’s bullpen in 2017 isn’t anything to be too excited about.

Offensively, the Pirates have a chance to be one of the better teams in the National League, but plenty of questions linger, most notably McCutchen. The former MVP is coming off the worst season of his career and he has much to prove in 2017. If he struggles the way he did a year ago, it’ll be tough for the Pirates to remain in contention, and he could find himself back on the trade block.

The rest of the outfielder, which now has a new defensive alignment, is in good shape with Starling Marte and Gregory Polanco, as well as Adam Frazier in a reserve role. However, the same can’t be said about Pittsburgh’s infield.

Jordy Mercer isn’t one of the more productive shortstops in baseball, while the Pirates haven’t been pleased about the decline in Josh Harrison the past couple of years. The Pirates need Harrison to have a bounce-back year, or else he could find himself fighting for his job.

There is also uncertainty with Kang’s availability for opening day, even after the conclusion of his legal trouble. This could put pressure on David Freese and a couple others to fill the shoes of a player who was arguably the team’s most productive hitter last year. The Pirates also need a big year from first baseman Josh Bell, who is going to be an every-day player in the majors for the first time.

To make matters worse, the Pirates no longer have super-utility man Sean Rodriguez, who could have been useful at a number of positions where the team has question marks. If those questions get answered, the Pirates will be fine, but if not, they’re a team that could struggle offensively this year.

The Pirates are definitely capable of improving upon last year’s 78 wins, but there are still quite a few questions heading into the season. Can McCutchen rebound? How good is the backend of the bullpen? Can the young starters live up to their potential and carry the team? These are not easy questions to answer.

Expect the Pirates to be a .500 team in 2017, finishing 81-81, placing them third in the NL Central. The rotation has a chance to be one of the better in baseball, and if that happens, the Bucs have a chance to surpass that win total and reach the postseason. However, there are too many uncertainties in the lineup and the bullpen to predict that heading into the season.