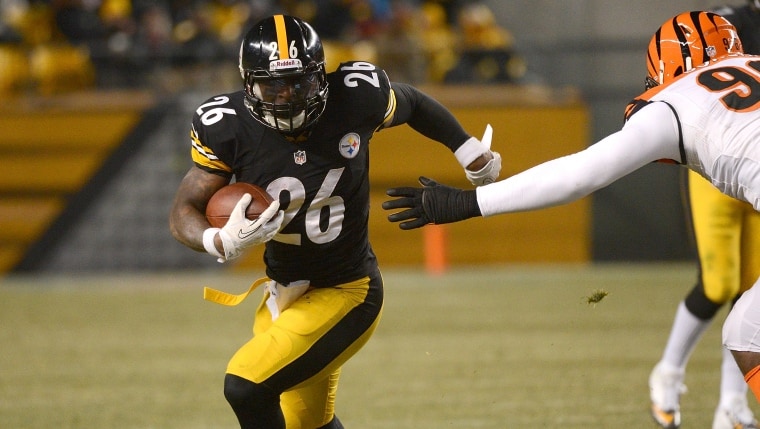 If there is one thing football fans are great at, it is taking something as simple and harmless as a line in a rap song and turning it into a thing. Recently, Pittsburgh Steelers running back Le’Veon Bell released a rap song and in the lyrics he referred to making $15 million a year:

People have been going nuts over it. He is one of the best running backs in the league, but $15 million would make him the highest paid back in the league. While the critics are quick to acknowledge how good he is, no one thinks he is as good or better than the current highest paid back—Adrian Peterson ($14 million).

Peterson has the kind of resume to warrant being paid what he’s getting; Bell doesn’t. Should the Steelers consider paying him even close to what he is looking for it will be because they think, he’ll be worth it.

However, as good as he is, the NFL is a passer’s league these days, and the Steelers have one of the best in the business catching passes from Ben Roethlisberger in Antonio Brown. The organization would be foolish not to offer him the best contract ever offered to a wide receiver. There is no way they can pay Roethlisberger, Brown, and Bell.

Brown doesn’t become an unrestricted free agent till after the 2017 season, but the Steelers will want to extend him next off-season along with Bell (if they don’t sign him to an extension before then).

Bell is going into the final year of his rookie contract. For the Steelers to retain him, they will have to pay him well. However, If he sticks to his guns and insists on $15 million, he will be disappointed. With the prevalence, the passing game these days, a stud running back is simply not important enough to pay that much.

DeAngelo Williams becomes an unrestricted free agent at the end of the coming season as well. He certainly played well in Bell’s absence last year. Williams is not as good as Bell, of course, but if the money ends up being an issue they may be willing to roll with Williams. He is not better than Bell, but he’ll be good enough for the Steelers.

Had Bell not had knee injuries each of the last two seasons, he could have a good argument for $15 million, but because of them, he is an injury risk. If there is one thing that can kill a running back’s career, it’s knee injuries.

As soon as they become leery of making a cut, taking a hit or lose a step, their days are numbered.

His season ended early last year because of a knee injury that required surgery. All expectations point to him being ready for the start of the season.

If he can return to his 2014 form this season and remain healthy the whole season, the Steelers will have to pay him well. With running back being devalued across the league, it is hard to imagine anyone offering him $15 million a season. If they do, it will be on the back end of a contract and not guaranteed (meaning he’ll get cut before that season).

The Steelers will probably offer him something in the realm of $10 million a season. It will make him the second highest-paid running back in the NFL—and there is nothing wrong with that.