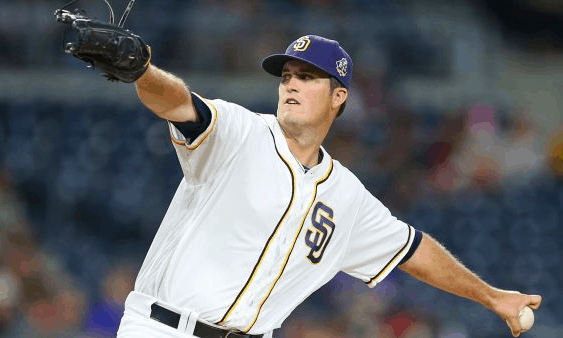 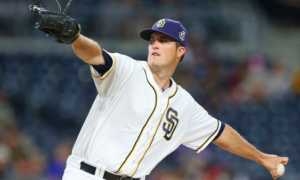 Just a couple days after San Diego Padres ownership insinuated that the team was not looking to trade first baseman Will Myers but would be willing to listen to offers for starting pitcher Drew Pomeranz, reports have surfaced linking the southpaw with the Texas Rangers. According to Ken Rosenthal, the Rangers “have done background work” on Pomeranz, indicating they have more than just a passing interest in him. Pomeranz was recently named to the All-Star Team and is expected to appear in Tuesday’s game in front of what are still his hometown fans.

Pomeranz is not the first starting pitcher to be linked to the Rangers, but the report indicates that he may be towards the top of the team’s wish list. The Rangers have had one of the best rotations in the American League this year, but currently they are trying to scrape by with Yu Darvish, Colby Lewis, and Derek Holland on the DL. Darvish is currently on a minor league rehab assignment, but having just returned from Tommy John surgery, his health his far from a guarantee. Lewis isn’t expected to return until late August, while Holland is several weeks away, making the rotation an area of need heading towards the non-waiver trade deadline.

The likes of Jake Odorizzi, Matt Moore, and Ervin Santana have also been linked to the Rangers, but Pomeranz is having a far better season than any of those pitchers. With Darvish’s health and effectiveness somewhat questionable moving forward, Pomeranz could give Texas a quality no. 2 starter to pair with Cole Hamels atop the team’s rotation. The Rangers also have a deep farm system that could allow them pursue some of the better players on the trade market this summer. Of course, Texas GM Jon Daniels has also said that he’d like to improve the team’s bullpen via trade as well.

From San Diego’s perspective, there is no need to trade Pomeranz, as he’s under team control through the 2018 season and the Padres could use him as a building block for the future. If the Padres don’t receive a worthwhile offer, they will have plenty of opportunities to trade Pomeranz in the future, although with his performance this season and the other pitchers available on the market this summer, his value may never be higher than it is right now.

Based on the current situation of each team, the Padres and Rangers would seem to match up well in a trade involving Pomeranz. The Rangers have a clear need for a frontline starter and a deep farm system where they have the prospects to acquire such a player. Meanwhile, the Padres have one of the best pitchers available and aren’t under any pressure to trade him unless they receive a substantial haul. This could make the Padres trading Pomeranz to Texas a distinct possibility, and something to keep an eye on as the trade deadline approaches.