Heading into the 111th edition of the Red River Rivalry, the annual showdown between the Texas Longhorns and Oklahoma Sooners, Charlie Strong had to be a little concerned about his job. Publicly, he hasn’t said it, but how could he not be? The seat got so hot after the loss to Oklahoma State he had to demote his defensive coordinator and take over the job himself.

But then the defense had to go and play ever worse against Oklahoma. If he wasn’t feeling the heat before, losing to Oklahoma 40-45 will certainly have it cranked up on him. 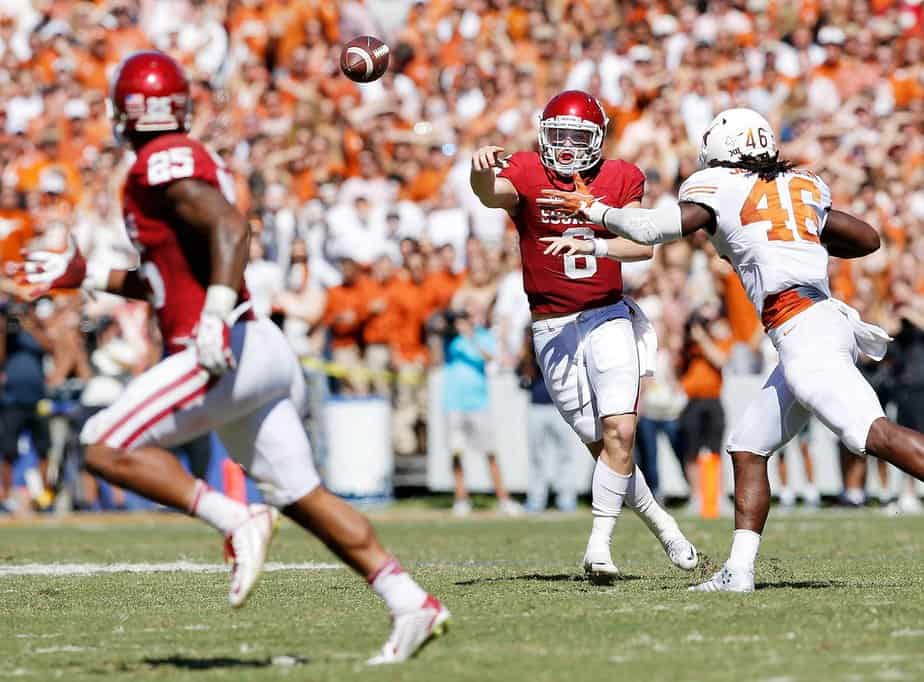 At first, it looked like the defense might make a dramatic improvement after just a week with Strong in charge. After four games without a single interception (and only one turnover), the defense picked off Baker Mayfield twice in the first quarter and recovered a fumble in the second quarter.

The high-powered Sooners offense didn’t have a single sustained drive in the first half. Their first touchdown was set up by a Texas fumble and the second came on a 71-yard play. But then the second half started, and it all went south.

Baker Mayfield, Dede Westbrook, and Samaje Perine couldn’t be stopped. Of the Sooners six second-half possessions, the Sooners scored touchdowns on the first four and a field goal on the fifth. They punted on the sixth, but in doing so left the Longhorns with 90-yards to cover in 17 seconds.

After slowing down Oklahoma’s playmakers in the first half, the Longhorns defense didn’t have an answer for any of them in the second half. Mayfield set a new Oklahoma record with 390 yards passing, the most for a Sooners quarterback against Texas. Dede Westbrook had ten receptions for 232 yards (new single-game Oklahoma records) and all three of Mayfield’s touchdown passes.

Perine didn’t set a new record, but he did have his fifth career 200+ yard day with 214 yards and two touchdowns on 35 carries.

With Charlie Strong calling the plays, the Longhorns gave up 672 yards—more than they have in any game this season and the most by a Texas defense since Charlie Strong became the head coach (gave up 600+ yards twice last season, but less than 672). The last time a Texas defense gave up so many yards was the 2012 edition of the Red River Rivalry when the Oklahoma gained 677 yards (and won 63-21).

After the game, Charlie Strong pinned the loss on Oklahoma’s big plays (ESPN):

“You just look at the plays we gave up. You can’t give up home runs thrown over your head.”

While three of Oklahoma’s touchdowns came off of big plays (passes of 71, 42, and 47-yards from Mayfield to Westbrook), the Sooners also two drives in the fourth quarter that nearly consumed a full quarter of time on the clock (13-plays, 6:27; 15-plays, 7:58).

So there was a lot more to the defensive ineptitude of the Longhorns than just big plays.

Texas AD Mike Perrin referred to this game as important after the way the Longhorns lost to Oklahoma State, but there has been no indication that the university may be looking to make a change now or if they will wait until after the season. Maybe Strong is being cut some slack because of the injuries on offense making it hard for the defense to get any support–or maybe since the offense is failing Perrin can’t justify promoting Sterlin Gilbert or any of the other offensive coaches.

Let’s be real–the entire defensive staff will be gone at the end of the season.

Should Texas continue to struggle when they face off next against a 1-win Iowa State team at home—well, Perrin will have to start worrying about his job status if he doesn’t do something about Strong’s.

Oklahoma will try to remain undefeated in Big 12 play when they face off against Kansas State next week at home.