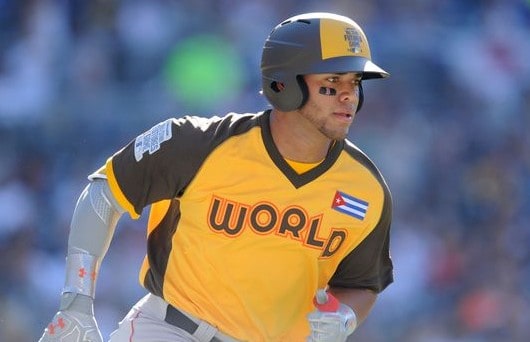 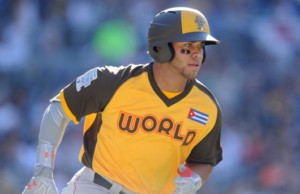 The baseball stars of the future were on display Sunday night in the annual Futures Game, and the brightest star of all was Boston Red Sox prospect Yoan Moncada, who was named the game’s MVP. Playing for the World Team, Moncada went 2 for 5, including a two-run home run in the 8th inning that helped to jump start a seven-run inning for the World that helped secure an 11-3 win over the U.S. Team.

Moncada, a second baseman, is currently the 5th ranked prospect in all of baseball, according to MLB.com. He’s currently playing with Boston’s double-A affiliate after earning a promotion last month. In just 16 games at double-A this year, Moncada is hitting .328 with five home runs, three doubles, and two triples, so it should surprise no one that he was one of the standouts of the Futures game.

The Red Sox signed him in March 2015 after Cuban authorities allowed him to leave his native country. Boston signed him for $31.5 million and then paid another $31.5 million in taxes for going beyond their international spending pool. However, Sunday’s game was just another reason to believe that Boston’s $63 million investment will end up paying off in the long run.

Soon after his 8th inning home run, Moncada was told that the Hall of Fame wished to display his bat, a great honor for the young Cuban. “I feel really excited and really happy that they really want my bat. But it’s really emotional as well,” he said through a translator after the game.

Afterwards, the 21-year old Moncada also talked about his parents back in Cuba. “I hope my parents could watch the game,” he said. “If they could, that would excite me a lot. They are not here with me. I miss them. If they weren’t able to watch the game, anyway I’ll call them tonight. I can’t send them a video, because you are not able to download videos with the Cuban infrastructure.” Moncada also said he was dedicating his MVP award to his parents.

Among the other standouts in the Future Game were the Cubs Eloy Jimenez, who hit a run scoring double and a three-run home run; the Padres Manuel Margot, who robbed the Cardinals Carson Kelly of a home run with a spectacular catch; the Astros Alex Bregman, who was a home run shy of the cycle; and the Cardinals Alex Reyes, who struck out four in 1.2 innings and hit 101mph on the radar gun several times.

The two teams were managed by Moises Alou, who now works as a special assistant in the Padres organization, and former San Diego closer Trevor Hoffman. Alou won a friendly dinner bet between the two after the World Team won. Alou says he plans to frame his lineup card from the game. “When I look at that lineup in my house in a couple of years,” he said, “there are going to be a lot of guys playing in the All-Star Game, I guarantee you that.”