The talk after Monday night’s Buffalo Bills-Seattle Seahawks game should be all about Russell Wilson appearing to be getting closer to his old self, Buffalo slicing through the Seattle defense with ease, and the Seahawks making the necessary adjustments to win the game. Those things are being discussed, but the lead story is instead the questionable actions of Richard Sherman and poor officiating.

Buffalo got off to a hot start by blocking a Seattle punt and setting the offense up on the three -yard line for an easy touchdown. The Seahawks answered with one of their own, but then the Bills began a drive that every team that plays Seattle will be looking at closely—a 17-play touchdown drive that took 10 minutes off the clock. 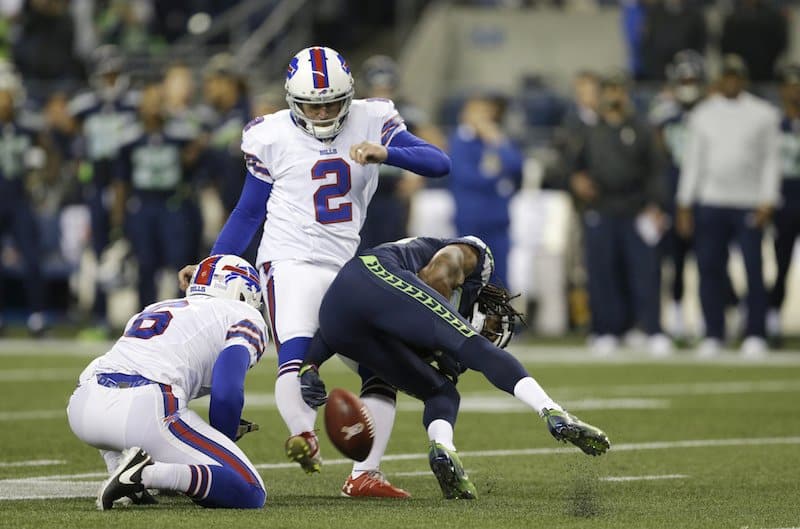 Yes, the Seattle defense didn’t have Michael Bennett or Kam Chancellor, but they are not the only ones that put the “boom” into the “Legion of Boom.”

But in the end, Seattle’s defense limited the Buffalo offense enough and made the most of what offense they had to win the game 31-25. It was Seattle’s 11th consecutive win on Monday night; their last loss came at the hands of Vinny Testaverde and the Dallas Cowboys in 2004.

Buffalo’s running game, Seattle’s lack of one, Russell Wilson starting to run again, and Seattle’s defense should be the focus of the talk, but instead, it is centered on another issue involving Richard Sherman and the officials—but this time he’s using them to his advantage.

Sherman should have been flagged for unnecessary roughness for his hit on Bills kicker Dan Carpenter towards the end of the first half, but the officials didn’t think his actions warranted the call. The ref, Walt Anderson, didn’t believe Sherman had an opportunity to stop once it became apparent the play was being blown dead and that he didn’t do enough to be called for the hit (PFT).

In the video, the whistle is blown late in the play so an argument could be made that Sherman couldn’t have stopped in time. However, that doesn’t excuse Sherman rolling his body so that he hits Carpenter in the knees with his shoulder. It doesn’t look like he was selling out to block a kick. It looked like he was going for Carpenter’s knees (Carpenter’s wife shared her thoughts on Twitter). 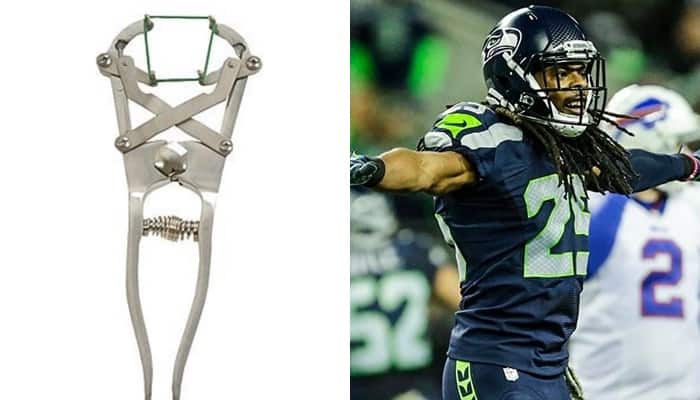 Sherman was asked about the play after the game and gave the usual weak excuses about playing to the whistle and not giving Buffalo a free play. He even tried to deflect blame onto Carpenter by saying he could have stopped rather than follow through with the kick. Sherman posted a picture to Instagram of him touching the ball while it was still in the holder’s hands in an attempt to prove he did nothing wrong.

According to the rules, a tipped kick takes the protection away from the kicker–but the ball wasn’t kicked yet. An argument could also be made that Sherman knew exactly what he was doing and did try to take out Carpenter’s knee. Why? He left his feet with his shoulder turned towards Carpenter’s knee–but reached back to touch the ball in an effort to make the play legal. So by tagging the ball a split second before he nailed Carpenter he technically did nothing wrong. But since the play was blown dead–touched

But since the play was blown dead–touched ball or not–he’s guilty. If it hadn’t been blown dead, it would not be a penalty but it would still be dirty. Many have patted him on the back for laying out a Bills receiver on the final play of the game because he knew that the illegal contact rules did not apply after Taylor left the pocket and had yet to throw the ball. But it is against the rules to hit a player that is out of the play (which was the case).

The league wasted no time stating that he should have been flagged. But the officiating problems didn’t end there.

The Bills had to run a play because, since Carpenter was hurt on the play and had to be looked at, he had to come off the field for a play forcing the Bills to spike the ball on one play to get him back on the field. Carpenter nailed the kick, but the Bills were called for delay of game (primarily because the ref stood over the ball until there were five seconds left on the play clock; another mistake by the ref).

They missed the next attempt (NFL).

Later in the game, it appeared as if Rex Ryan and Richard Sherman had words following an interception by Sherman. He claims nothing was said or at least nothing he could hear, but Ryan said he told him he was “too good of a player to be acting like an ass.”

Carroll, who tried to deflect some of the blame for Sherman’s questionable hit to Carpenter, but even admitted Sherman should have been flagged. He also had a response for all of Rex Ryan’s comments:

“I just wish he’d coach his own team,” Carroll said. “Just coach your own guys.”