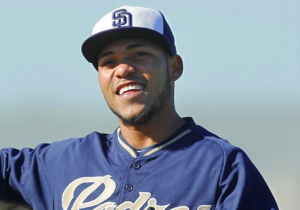 The Colorado Rockies have not been shy about spending money or adding players this offseason, and on Monday they added a minor but potentially important piece of the puzzle by agreeing to terms with utility infielder Alex Amarista. Details of the contract have yet to be announced, but Jon Heyman reports that it is a one-year contract with a club option for 2018. Amarista became a free agent after the San Diego Padres declined to tender him a contract in his final year of arbitration.

Amarista first came to the majors in 2011 with the Los Angeles Angels. He was then traded to San Diego early in the 2012 season and had been with the Padres for the past five seasons until the team declined to retain him for 2017. Amarista has been mostly a bench piece throughout his career, but he has been San Diego’s regular shortstop off and on over the past few years.

He’s never been a standout offensive player, but the past two seasons Amarista was particularly disappointing with the bat, posting an OPS below .600 in both 2015 and 2016. Last season, Amarista hit just .257, appearing in just 65 games, as he was bounced back and forth between triple-A and the majors quite a few times and then missed most of August with a hamstring injury. After the two worst seasons of his career in back-to-back years, it’s a little surprising that Amarista was given a major league contract, but the Rockies apparently feel he warrants another opportunity.

Amarista’s biggest strengths are his defense and his versatility. He’s a sound defender at his natural shortstop, but throughout his career he’s also played at second base and third base. Amarista even received some exposure in the outfield in 2016. His ability to play multiple positions may be what has given him a job in the big leagues for 2017.

Colorado’s middle infield is solidified with Trevor Story the every day shortstop and D.J. LeMahieu handling second base, although their depth at those positions is somewhat lacking. Cristhian Adames backed up both positions for the Rockies in 2016, but he failed to distinguish himself, hitting just .218 with a .607 OPS. The Rockies may view Amarista as a better option for that role given his experience, although there could be room on the roster for both players.

It should be noted that Amarista is familiar with Colorado’s new manager Bud Black, who managed Amarista with the Padres from 2012 to 2015. That familiarity may have helped Amarista land a job in Denver. Amarista’s best years came when Black was his manager in San Diego, so perhaps a reunion is what he needs to get his career back on track. The hitter-friendly conditions at Coors Field may help as well.

Obviously, adding Amarista doesn’t move the needle much in terms of Colorado catching up to the Dodgers and Giants at the top of the NL West. But it’s a move that has a chance to strengthen their bench, and the fact that the Rockies are spending money in free agency to improve their bench indicates that the team believes their roster is in good shape and that they are in position to compete in 2017.