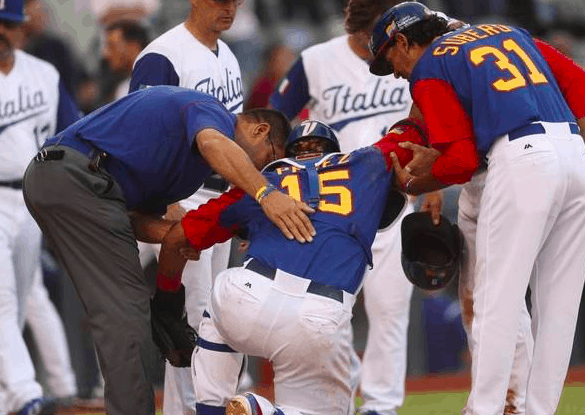 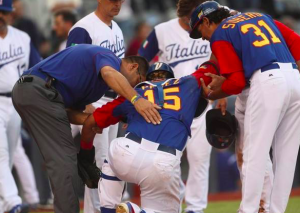 Kansas City Royals catcher Salvador Perez suffered a knee injury Saturday night while playing for Team Venezuela in the World Baseball Classic. Perez suffered the injury during a home plate collision with Royals teammate Drew Butera, who made an ill-advised effort to score the game-winning run for Team Italy. Perez made the tag, forcing the game into extra innings, where Venezuela ultimately won. However, Perez had to be helped from the field and could not put any weight on his left knee.

At first glance, the injury looked devastating for both Perez and the Royals, but Team Venezuela reported late Saturday night that an MRI on Perez’s knee showed no structural damage. However, the MRI did show inflammation around his knee that will keep Perez out for the rest of the WBC. It’s unclear at this time how long he’ll be out, but Venezuela ruling him out for the rest of the tournament indicates it’ll be at least a few days or a week until Perez is able to get back on the field.

“The update on Salvador Perez is he’s got a loose knee,” Venezuela manager Omar Visquel reported. “He’s got to go to the clinic and have some X-rays done to see if everything is going to be fine with him.”

“He was in a lot of pain at first,” said Royals GM Dayton Moore, who confirmed that the team has been in contact with Perez. “But he said he’s feeling much better. But we won’t know anything definitively until (Sunday) after the X-rays and imaging is done and examined. We just don’t know right now.”

The ultimately irony of the situation is that Butera, who’s in line to be Kansas City’s backup catcher this year, was the one who collided with Perez. Butera has been with the Royals since May 2015 and signed a two-year deal with the club back in November.

“I feel really bad,” Butera said via Twitter. “I thought the ball was going to be in the gap and I was just trying to score. When I saw that I was going to be out by a lot, I just stopped. It was unfortunate that I hit him where I did. Obviously, I wasn’t trying to hit him. I hope he is OK”

Obviously, the injury to Perez is an example of why major league clubs are weary about the WBC. Of course, Perez could have just as easily suffered a similar injury during a spring training game, although Butera wouldn’t have been the one sliding into him.

Perez has been an all-star and Gold Glove winner each of the past four seasons, so losing him for any period of time during the regular season would be a huge blow for the Royals. The 26-year old backstop also won the Silver Slugger award last year after hitting a career-high 22 home runs.

If Perez does miss time with the Royals this season, Butera will become Kansas City’s primary starter. The 33-year old veteran is known mostly for being a solid defensive catcher, but Butera managed to hit .285 with an OPS of .808 in 55 games last season. Of course, he’s still a .198 career hitter in the big leagues. Major league veteran Brayan Pena is with the Royals on a minor-league contract in case they need a backup for Butera to start the season.

The good news for Perez and the Royals is that the MRI came back negative for structural damage. Nevertheless, the Royals are still holding their breath until they have a better idea of how long Perez will be out. It appears as if he’s avoided a serious injury, but his status for the start of the season remains uncertain.