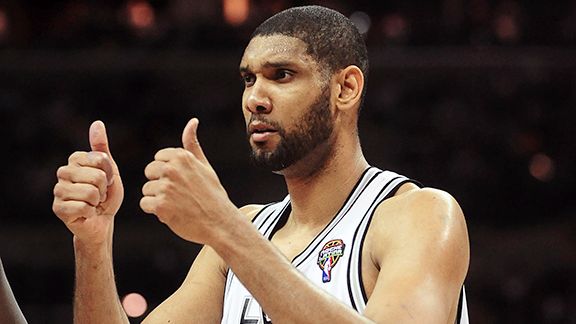 It is a sad day for fans of the San Antonio Spurs. It’s a day they know could have come anytime over the last couple of years, but with Tim Duncan turning 40 in April there was a good chance it would happen this year—and sure enough, it did.

Tim Duncan, the Big Fundamental, has decided to retire.

Fans had a feeling he may call it quits with how things went in the team’s final game of the season, the Game Six loss in the Western Conference Semifinals to the Oklahoma City Thunder. Duncan had been relatively quiet throughout the series but seemed to turn it up a notch in Game Six as if he was determined not to let his final game be a lousy one.

It wasn’t great, and the team lost, but he did score 19 points in 34 minutes. It was more than he had scored in every other game during the postseason and the most he had played as well. At one point in the game Duncan and head coach Gregg Popovich could be seen having a conversation on the bench. Duncan ended up not coming out during the final quarter

He scored more than 19 only once during the regular season where he averaged a career-low 8.6 points, 7.3 rebounds, and 25.2 minutes a game.

After the game, the press asked him if he was going to retire, but he didn’t bite:

“I’ll get to that after I get out of here and figure life out,” he said.

When he exercised the option on his contract it gave fans reason to hope he might return for an unprecedented 20th season—all with the same team—but doing so just gave him the option to play if he had decided to return.

Instead—he decided to call it a career 19 years after being taken with the No. 1 pick in the 1997 draft. Only two other players in NBA history have done the same; John Stockton spent 19 seasons with the Utah Jazz, and Kobe Bryant spent 20 with the Los Angeles Lakers. Dirk Nowitzki will be playing his 19th with the Dallas Mavericks next season.

With his resume, there is no doubt he will be inducted into the Hall of Fame as soon as he becomes eligible:

The 1,001 wins under the guidance of head coach Gregg Popovich is the most by any player-coach combo in NBA history. Since drafting him, the Spurs have gone 1072-438 during the regular season. It is the best 19-year stretch by any team in NBA history and the most successful one by any franchise in the four major professional sports in North America.

“It’s great to have confidence in who’s leading your organization and your team and knowing that they have your best interests at hand,” Duncan said in 2014. “That’s what made me stay, and that’s what kept me here all these years.”

During his 19 seasons, the Spurs made the postseason in each losing in the first round only four times and making it to the Finals six times (winning five). The team won at least 60 percent of its games each year and 50 or more for the last 17 seasons.

San Antonio has been preparing for this and looks to be prepared to continue winning without Duncan next year. They acquired LaMarcus Aldridge last off-season to give the team another scoring threat to go with Kawhi Leonard. This year they added Pau Gasol.

In an age where players are announcing their retirement before their final season, it is just like Duncan to not do so.

“Timmy’s never been a very outspoken or emoting sort of individual on the court,” Popovich said earlier this year. “Everybody does it differently.”

Duncan will not even be holding a retirement press conference. Greg Popovich will meet with the media Tuesday to discuss Duncan’s retirement.