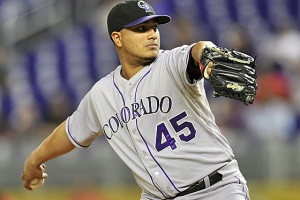 The San Diego Padres have signed veteran starting pitcher Jhoulys Chacin to a one-year contract. The deal is still pending a physical, and so the Padres have not formally announced it. However, reports indicate that the deal is worth $1.75 million. San Diego, of course, has not been all that active this offseason, nor were the Padres expected to be big spenders this winter. Nevertheless, the Padres, who are in the midst of a huge rebuilding effort, still need to field a roster of 25 players, leading them to make an offer for Chacin.

The 28-year old Venezuela native has bounced around quite a bit the past couple of years after spending his first six seasons in the big leagues with the Colorado Rockies. After being released by the Rockies following a 2014 season plagued by a shoulder injury, Chacin signed a minor league deal with the Indians but didn’t make it back to the majors. He then signed with the Diamondbacks and ended up making five major league appearances that year.

In 2016, Chacin earned a spot with the Atlanta Braves after signing a minor league contract. In May, the Braves traded him to the Angels, a team starved for pitching after a slew of injuries. Between the Braves and Angels, Chacin made 34 appearances in 2016, including 22 starts. He went 6-8 with a 4.81 ERA, and while he was decent as a starter, Chacin had a bit more success pitching out of the bullpen.

Interestedly, reports indicate that other teams offered Chacin more money than San Diego did, but that he chose to sign with the Padres because they offered him a better opportunity. The translation of that is most likely the Padres assuring Chacin the opportunity to work as a starter, whereas other teams may have seen him as a pitcher better suited for the bullpen but who could start if needed.

Naturally, the Padres are in need of starting pitchers who can just eat innings for them during the rebuilding process. In the past year, the Padres have traded away starters James Shields, Andrew Cashner, and Drew Pomeranz, creating plenty of vacancies in their rotation. The Padres also chose to not tender a contract to Tyson Ross, as he returns from thoracic outlet syndrome, because they didn’t want to pay such a high salary for a pitcher who made just one start last season.

Even with Chacin added to the mix, the Padres aren’t exactly overflowing with strong options in their rotation. Outside of Chacin, Jarred Cosart is San Diego’s most experienced starter, although he has an injury-plagued past and posted an ERA of 6.00 in 13 starts last season. Lefty Christian Friedrich also returns after being a consistent part of San Diego’s rotation in 2016. Youngsters Paul Clemens, Cesar Vargas, and Luis Perdomo are expected to fill out the rest of the team’s rotation.

Considering the state of San Diego’s rotation, Chacin may actually have a chance to be the team’s opening day starter in 2017. That’s obviously not an ideal scenario for the Padres, although the team knows they are a few years away from competing. As for Chacin, he now has the chance to restart his career after experiencing plenty of ups and downs the past couple of years. At age 28, Chacin should have plenty left in the tank, and if he can stay healthy and put together a solid season in San Diego, he’ll position himself for a more lucrative contract next offseason.