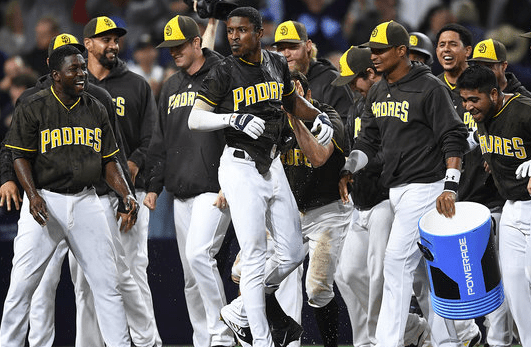 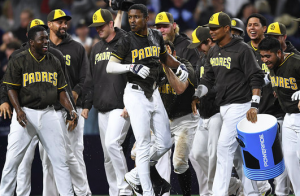 The San Diego Padres haven’t had a winning season since 2010, and based on the state of the team’s rebuilding efforts, it could be a few more years until that changes. San Diego has a nice collection of young talent, but even the team’s front office admits the team isn’t expecting to compete in the next couple of years. So just how bad will it be for the Padres in 2017?

Most of San Diego’s starters from last season are no longer with the club or unavailable for one reason or another, including Andrew Cashner, Drew Pomeranz, and Colin Rea. However, the club has managed to sign several veterans to help anchor their rotation in 2017, taking pressure off the club’s young and developing arms.

The trio of Clayton Richard, Jered Weaver, and Jhoulys Chacin will headline San Diego’s rotation in 2017. That’s obviously not a trio that will carry the Padres to the postseason, but having three seasoned veterans on an otherwise young team will certainly help.

More than anything, the Padres are hoping that some of their younger pitchers will be able to establish themselves in the back-end of the rotation and ultimately take on more prominent roles in the years to come. Luis Perdomo was solid in 20 starts last season, and there is hope that he can take another step forward in 2017. The same is true for pitchers like Christian Friedrich and Jarred Cosart, who could be important pieces for San Diego’s rotation in the future.

San Diego’s bullpen remains a work in progress, but there’s some hope that the Padres can put together a solid group of relievers. Carter Capps is coming back from Tommy John surgery and poised to take over as the closer in his first year in San Diego. Capps has never been a big league closer before, but he posted a 1.15 ERA with the Marlins in 2015 before needing Tommy John, and if he can recapture his form from that season, he may be able to provide the Padres with a closer for the foreseeable future.

If Capps can close, the Padres figure to have a nice contingent of setup men in front of him. Brandon Mauer saved 13 games last season but should be better suited for a relief role. Lefties Brand Hand and Ryan Buchter both had breakout seasons in 2016 and could become permanent fixtures in San Diego’s bullpen, joining Kevin Quackenbush, who’s provided a steady presence for the Padres the past three seasons. It may not be a dominant bullpen, but if Capps can remain the closer, the San Diego bullpen will hold its own in 2017.

Offensively, the Padres are very much a work in progress, but they are finally starting to get some of their top prospects to the majors and into the kinds of roles they figure to play for years to come. The lone constant, of course, is first baseman Will Myers, whose future is secure after signing an extension with the club earlier this winter. Third baseman Yangervis Solarte also appears to be one of San Diego’s key players after a breakout season in 2016.

Outside of Myers, there is a lot of youth, but definitely some potential. Top outfield prospects like Hunter Renfroe and Manuel Margot will have a chance to lock down starting jobs for the Padres this season, while Alex Dickerson and Travis Jankowski will also have a chance to earn regular playing time.

Elsewhere, it finally appears to be time for catching prospect Austin Hedges to take the reigns full time behind the plate. Shortstop Luis Sardinas appears to be in a similar situation after bouncing around from one team to another for the past few years. Second base remains unsettled for the Padres, but there are some good candidates for the position, including Ryan Schimpf, who hit 20 home runs for the Padres last year, and Cory Spangenberg, who is hoping to bounce back after a leg injury limited him to just 14 games last season.

After just 68 wins last season, there’s little hope for the Padres in 2017. However, there are reasons to be intrigued by players like Renfroe, Margot, Sardinas, Hedges, and others getting a chance to play in the majors. Those players represent the first signs of light at the end of a long rebuilding tunnel.

Nevertheless, look for the Padres to go 64-98 this season. There will be a lot of growing pains in San Diego this year, but for the Padres, it’ll be one final step backward until they start showing tangible signs of improvement in 2018 and 2019.