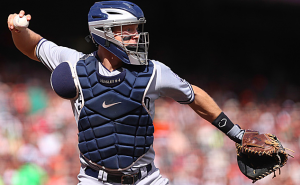 After signing closer Mark Melancon to a long-term contract early in the offseason, the San Francisco Giants have been noticeably quiet this winter. However, with spring training just a few weeks away, the Giants appear to be taking advantage of a buyer’s market and signing some free agents late in the offseason. Monday night, the Giants agreed to sign Korean infielder Jae-gyun Hwang on a minor league deal, and they followed that up on Tuesday by signing catcher Nick Hundley to a one-year deal worth $2 million.

A possible deal for Hwang has been rumored a few weeks ago, as the 29-year old has appeared determined to find his way to the big leagues. He turned down more lucrative offers from teams in his native South Korea in order to sign a minor league deal with the Giants that will pay him $1.5 million in 2017 if he makes San Francisco’s opening day roster.

Hwang is considered one of the best hitters in Korea, and with players like Jung Ho Kang of the Pirates and Hyun Soo Kim of the Orioles establishing themselves as productive big leaguers, teams have become more open to signing Korean players. Of course, Hwang will have to prove himself during spring training, but he’s coming off a year in the Korean Baseball Organization in which he hit .330 with 26 home runs in 118 games.

Heading into the season, Conor Gillaspie and Eduardo Nunez are expected to battle for the starting job at third base, which is Hwang’s natural position. With a strong showing in spring, Hwang could conceivably platoon at third base with Gillaspie, allowing Nunez to take on a super-utility role. The Giants may also look to see if Hwang is capable of handling other positions in the infield or outfield. Being able to fill a utility role could help him make San Francisco’s opening day roster.

Meanwhile, the addition of Hundley will solidify things for the Giants behind the plate. Hundley figures to serve as the backup to Buster Posey, most likely relegating last year’s backup, Trevor Brown, to the minors. In limited big league action over the past two seasons, the 25-year old Brown has hit .236 with five home runs. At the same time, the last two seasons have been two of Hundley’s best offensively, although it should be noted that he spent those two years with the Rockies playing half his games at Coors Field.

Another interesting dimension that Hundley brings to the table is the fact that he’s spent nearly his entire career in the NL West, making him familiar with many of the hitters in the division. Metrics point to a decline in Hundley’s defensive skills, but he continues to be praised for his ability to call games and work with pitchers. This could help make Hundley a noticeable upgrade over the younger Brown.

The additions of Hwang and Hundley are far from marquee signings, but both are relatively cheap signings that have a chance to improve the periphery of San Francisco’s roster, which can make a difference if the Giants find themselves in a tight playoff race this season. Hwang, in particular, is a wild card, as his offensive track record in Korea is quite impressive. Meanwhile, Hundley is certainly an upgrade at the backup catcher spot, providing the Giants added insurance behind Posey. Both signings have a chance to pay off for the Giants 2017.