Several NFL Teams Get In On The “Pokemon Go” Fun–Because They #GottaCatchEmAll! 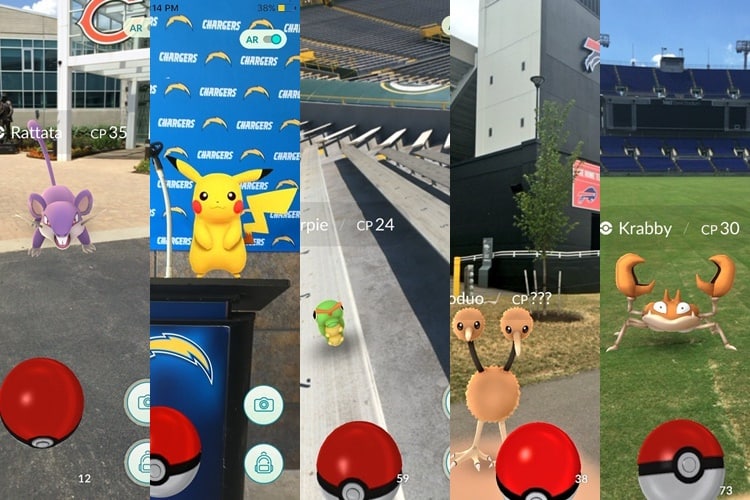 Football is a game. We forget that sometimes because of the billions of dollars involved and the emotion—good and bad–it tends to generate in people, but when it comes down to it, football is only a game. We start playing it as kids and for many, it is a way of keeping the child inside alive. However, over the weekend several NFL teams and players found something else to keep the kid in them alive.

On July 6, the Pokemon Company released a new version of the popular game called Pokemon Go. It essentially gives users the chance to be a Pokemon trainer in the real world. After users create an avatar, they are given a map of their current location and immediate surroundings—along with the location of Pokemon gyms and characters. Then they do what a Pokemon trainer should do.

The game has become an overnight sensation capturing the attention of millions since it was released. But kids, nerds, and gamers were not the only ones that got swept up in the craze. Several NFL teams and players couldn’t resist the urge to get involved.

Apparently, there was a Pokemon character outside of the Chicago Bears facility. The team was okay with it, but they did have one issue:

We wouldn’t mind the pests outside Halas Hall, but do they have to be purple? #PokemonGO

The Vikings couldn’t help but fire back. They posted a video of the Bears defense trying to tackle Viking wide receiver Stefon Digg last season with the following caption:

BREAKING: We are aware of a creature infestation at the Ralph and are currently working to catch ’em all. #PokemonGO

The Green Bay Packers had a little visitor of their own:

It looks like the San Diego Chargers are Pikachu fans:

Pikachu knows where to recharge

The campus police at Florida State got in on the act as well by poking a little fun at a former Seminoles quarterback with a picture of Krabby and the following caption:

Can anyone confirm if this location is at #FSU football locker room? #PokemonGO #FSUfootballjokes #Publixhttps://twitter.com/CatchEmAlI/status/752569961479081985 …

Several players got in on the act as well. However, while the game was intended to generate buzz, not all of it has been positive. Several players have taken playing the game a little too seriously and broken the law or created a public safety issue in their attempt to capture a character.

According to a tweet sent out by the Texas A&M police, at least one accident was caused in College Station because of the game:

The game is clearly a winner for Nintendo (who own the Pokemon Company). It has succeeded in generating interest, an immense amount of buzz, and—of course–revenue. It certainly can’t hurt to have so many teams and players promoting the product as well.

However, if a player gets hurt playing the game, we could see a real battle on social media between NFL fans blaming the game and Pokemon fans.

Now that would be a battle worth catching.