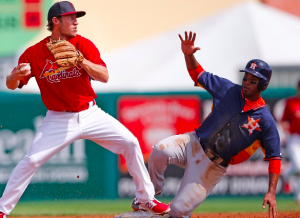 Major League Baseball announced Monday that it has levied punishment against the St. Louis Cardinals after a former team employee hacked into a player database belonging to the Houston Astros. In 2013 and 2014, former Cardinals scouting director Chris Correa illegally gained access to Houston’s servers that included scouting reports, player evaluations on potential draft picks, and trade discussions with other teams.

Commissioner Rob Manfred has fined the Cardinals $2 million, which the club will have to pay within the next 30 days. St. Louis has also been stripped of its top two draft picks in this year’s draft. Those picks, the no. 56 and no. 75 overall selections, will now belong to the Astros. The Astros will also receive an additional $1.8 million in their bonus pool to sign draft picks. St. Louis previously lost its first round pick after signing outfielder Dexter Fowler, who received a qualifying offer from the Chicago Cubs.

“The type of potential comparative harm the Astros suffered as a result of Mr. Correa’s conduct is not amenable to precise quantification,” Manfred wrote in his ruling. “MLB clubs fiercely compete with each other in their ability to acquire and process player-related information. I am prepared to find as a matter of policy that a Club suffers material harm when an employee of another club illegally accesses its confidential and proprietary information, particularly intrusions of the nature and scope present here.”

According to Manfred, MLB’s investigation found no evidence that anyone from the Cardinals other than Correa had improper access to Houston’s database, a finding that the team has maintained all along. Nevertheless, the Commissioner said he was “holding the Cardinals responsible for his conduct.” Manfred also ruled that the Astros “suffered material harm as a result of Mr. Correa’s conduct.”

Following an FBI investigation into Correa’s activities, he pleaded guilty in January 2016 to accessing Houston’s email system and scouting database. Last July, he was sentenced to 46 months in a federal prison on five counts of accessing another company’s private information. The Cardinals fired him in 2015 following their own investigation into the matter. Just in case another team considers hiring him after his prison sentence, MLB has placed Correa on the permanently ineligible list, the same list as all-time hit leader Pete Rose.

“We respect the Commissioner’s decision and appreciate that there is now a final resolution to this matter,” said Cardinals chairman and CEO William O. DeWitt Jr. in response to Manfred’s punishment. “Commissioner Manfred’s findings are fully consistent with our own investigation’s conclusion that this activity was isolated to a single individual.”

“This has been a long and challenging process for all of us, especially those within our baseball operations department,” added Cardinals GM John Mozeliak. “We have learned a great deal along the way, and we have taken additional steps to ensure that something like this doesn’t ever happen again.”

The Astros also released a statement accepting Manfred’s ruling. “The Houston Astros support MLB’s ruling and award of penalties,” reads the statement. “This unprecedented award by the Commissioner’s Office sends a clear message of the severity of these actions. Our staff has invested a great deal of time in support of the government, legal and league investigations and are pleased to have closure on this issue.”

With Manfred’s ruling on Monday, the matter is officially closed. The loss of draft picks is significant for the Cardinals, who won’t have a draft selection until the 94th overall pick this year. The Astros, meanwhile, receive two additional picks to improve an already impressive farm system. Manfred’s punishment is intentionally harsh as a way to discourage similar transgressions in the future, and hopefully it will do just that.