Stephen Drew Goes On DL As Nationals Lose Another Shortstop 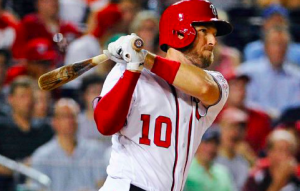 In the 5th inning of Washington’s win over the Cardinals on Tuesday, Drew’s cleats got stuck in the ground while he was running out of the batter’s box on a ground ball. He slowed up and grabbed the back of his leg as he arrived at first base and was removed from the game the following inning.

Drew started at shortstop in place of Turner on Sunday and Monday, and because he’s been a part-time player in recent seasons, Washington manager Dusty Baker had originally planned to give Drew the day off on Tuesday. However, he changed his mind and decided to give Drew the start at third base in order to give the struggling Anthony Rendon a day off early in the season. That plan appears to have backfired with Drew going down just days after the Nationals lost Turner.

“It’s a big setback when you got two out of your three shortstops that are down,” Baker said Tuesday. “The shortstop that took Trea’s place is now injured, so they’re both injured. We just got to do whatever we can, hopefully score as many runs as we can to try to offset that until Trea comes back.”

The initial belief is that Drew’s hamstring injury is a little more serious than Turner’s. The Nationals have hoped all along that Turner would be able to come off the DL as soon as he’s eligible, while Drew may not be ready to return until sometime in May. Turner is still more than a week away from being eligible to come off the DL.

Until Turner is ready, the shortstop responsibilities in Washington will fall on Wilmer Difo. The 25-year old middle infielder has spent parts of the last two seasons with the Nationals but has seen limited playing time. Difo is 2 for 9 this season, giving him just 78 big league at-bats. Washington shouldn’t expect to get much power out of Difo, although he’s hit for a good average throughout most of his minor league career and should be reliable with the glove.

To help fill out their bench, the Nationals have brought up journeyman Grant Green to fill Drew’s spot on the roster. The 29-year old Green has 327 big league at-bats dating back to 2013 but has made little impact in the majors across tenures with three different clubs. However, he’s an accomplished minor league hitter who does have experience playing a multitude of positions, including shortstop, giving Difo at least a little bit of help.

On the bright side for the Nationals, Adam Eaton has filled in nicely in the leadoff spot since Turner has gone down. However, losing both Turner and Drew in quick succession was definitely not part of the team’s plans. It will further test Washington’s depth in what is still a rather congested NL East just over a week into the season.