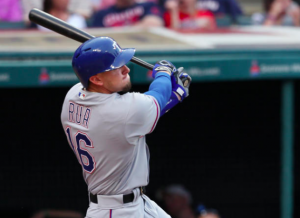 Stifled by a team-wide slump early in the 2017 season, the Texas Rangers are trying to shake things up in an effort to find the right lineup. The first change is coming in left field, where Ryan Rua will now assume the duties on a regular basis, Rangers manager Jon Banister announced Tuesday. Jurickson Profar had been getting most of the time in left field this year, with Rua playing primarily against left-handed pitchers, but now Rua will get his chance to play every day.

“We have given Profar a long enough look, now we are going to give Rua an opportunity,” Banister explains. “He is moving over from a platoon and we’re giving him bulk at-bats together. We are trying to get a guy and see if he can spark. It wasn’t happening on the other end.”

Profar, who was once one of the top prospects in all of baseball, is hitting just .135 with a .424 OPS. In his defense, Profar is still getting used to playing left field, as the Rangers have no room for him on the infield. However, learning a new position on the fly is not an excuse for hitting just .135 with no extra-base hits at this point in the season.

Rua, meanwhile, hasn’t been much better this year, collecting just three hits in his first 26 at-bats of the season. However, he was productive for long stretches last season. Yet, he’s had trouble solidifying himself as anything more than a platoon player. He’ll now get a chance to prove himself and lock down the every day job in left field for the Rangers.

“His at-bats haven’t always looked that great, but some have looked like Rua last year,” Banister said. “To get that look, he needs extended games to get in that rhythm.”

Of course, Banister says he may also try to get Delino DeShields some at-bats in left field, most likely against left-handed pitchers. DeShields had a strong spring and made a strong case for being the team’s primary left fielder. However, he’s just 2 for 17 this year and has only started four games to this point in the season.

“I think they are a little different type of players,” Banister said, comparing DeShields with Rua. “DeShields is more of a speed-type guy. Rua has more impact with the power numbers. I like the flexibility of DeShields and being able to use him with his impact speed.”

With Profar already failing to assert himself in left field, if Rua and DeShields continue to struggle as well, the Rangers may still have one more option in Joey Gallo. At the moment, Gallo leads the team with six home runs and is second behind Nomar Mazara with 15 RBIs while filling in for the injured Adrian Beltre at third base. There’s no timetable for Beltre’s return, but when he does, Gallo may be out of a job unless he can force his way into the lineup in left field. That could put pressure on Rua to solidify the left field job before Gallo becomes an option.

To be fair to Rua, the Rangers aren’t expecting him to perform any miracles or turn their slumping lineup around. Outside of Gallo, Mazara, and Elvis Andrus, no one in the Texas lineup has produced with any kind of consistency this season, which is why the reigning AL West champs find themselves under .500 during the last week of April. But if Rua can play a role in getting the Rangers turned around, it’s worthwhile to give him the chance to play every day.

“Where our offense is, we need to find as much offense as we can,” Banister said. “Our offense hasn’t been operating on all cylinders. We need to get this going in the right direction.”