Heading into Sunday night’s game against the Indianapolis Colts it looked like Brock Osweiler might be the worst free agent deal of the summer. His rating was one of the worst in the league as was the Texans offense. At its best, Houston’s offense looked okay in its three wins. During the losses to New England and Minnesota?

Calling the Texans offense terrible for those two is being generous. 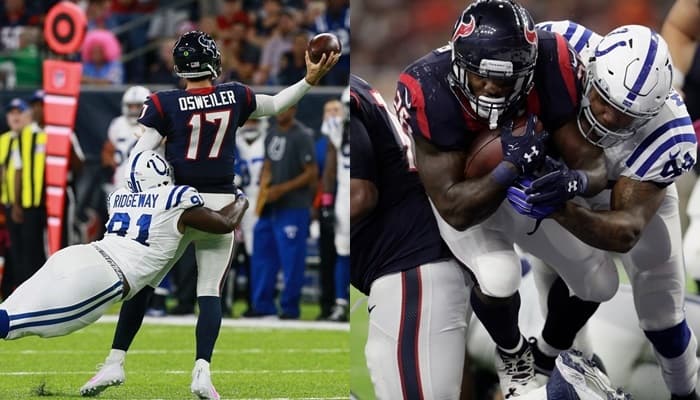 But they still lead the division, and there is a lot of football left to be played—not to mention time to right the ship and get the offense on track. What the Texans needed was a confidence booster; a game against someone with a struggling offense and a terrible defense—which it had lined up with the Indianapolis Colts Sunday night.

While it was a chance for the Texans to get things right, the Colts could say the same thing. Their much-maligned defense could use a game against a struggling offense—which the Texans definitely were–to boost its confidence. After a sluggish start to the season, it would do the Colts a world of good to get a win on the road, improve to 3-3, and pull into a tie in the division.

For most of the game, it looked like the Colts were going to have a happy flight back to Indianapolis, and the Texans were going to have a quarterback controversy on their hands. Heading into the third quarter, the Colts were on top, 20-9. At that point, Osweiler was 11-22 for 89 yards and an interception (which lead to an Indianapolis touchdown).

To say it looked bad for Houston would be an understatement. But then Adam Vinatieri kicked a field goal with about seven minutes to go that gave the Colts a 14-point lead.

With how the Texans offense—with the exception of Lamar Miller—had looked, this game was done. There was no way Osweiler could lead two touchdown drives with the time that was left.

But then he did.

With the help of the defense (forcing Indianapolis to go three and out), Osweiler looked worth every penny of his contract as he guided the Texans on two late touchdown drives, one of 12-plays and the other three plays.

When the team needed him most, Osweiler came up big going 12-15 for 135 yards and two touchdowns in the fourth quarter.

Indianapolis got the ball to start overtime. Houston’s defense put the onus back on the Texans offense by shutting the Colts offense down and forcing them to punt. A few plays later, Houston moved into field goal range after Osweiler connected with Jaelen Strong on a 36-yard pass.

Rather than tempt fate, the Texans lined up the ball where Nick Novak wanted it and let him kick the winning 33-yard field goal in overtime.

After the game, Osweiler had a message for the many fans who decided to leave the stadium early:

“I just hope everyone hangs around for all four quarters next time because I can promise you one thing: This team is never going to stop fighting,” Osweiler told NBC.

Osweiler ended up having a decent day (25-39, 269 yards, two touchdowns, and an interception), but the real hero on offense was running back Lamar Miller (178 total yards and a touchdown) whose second half play was instrumental in breaking the Colts defense.

If Osweiler wants the critics to stay quiet, he’ll have his work cut out for him when the Texans travel to Denver to take on the Broncos. Andrew Luck will try to get the Colts back on the right side of the scoreboard when Indianapolis travels to Nashville to play the Tennessee Titans.