New York Giants head coach Ben McAdoo probably thought he was finally going to get a chance to live the dream. After working his way up the ranks and becoming the Giants offensive coordinator in 2014, he was named the head coach of the team after longtime head coach Tom Coughlin resigned following the end of the 2015 season.

But now the dream appears to be becoming a bit of a nightmare. After a nice win over the Cowboys to start the season followed by another over the Saints, McAdoo’s Giants have lost three in a row after dropping Sunday night’s game against the Green Bay Packers, 23-16. 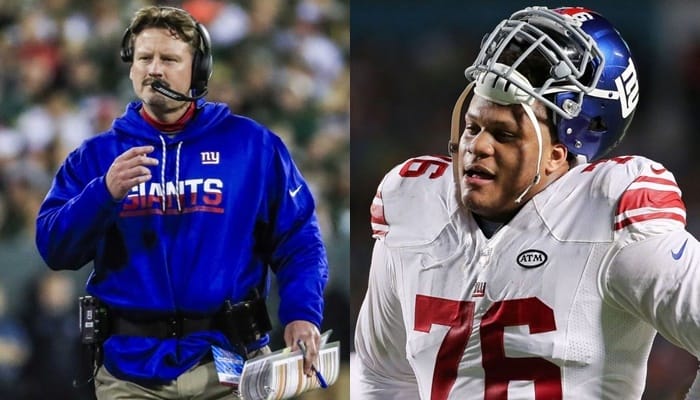 The game was not nearly as competitive as the final score would make it appear to be (23-16, Green Bay). The Giants were never able to generate much offense, and the only thing that seemed to slow down the Packers was an injury to Eddie Lacy. Aaron Rodgers got the Packers off to a strong start with a 16-play, 75-yard drive that took almost nine minutes of the first quarter and ended with a touchdown. Eli Manning’s response?

He got one first down before the Giants had to punt—and it never really got much better than that. New York’s offensive line had trouble giving Manning time and couldn’t provide the Giants running backs with any running lanes. In total, the Giants backs had fifteen carries for a whopping 43 yards. For the season, they are averaging 3.8 yards a carry, but Sunday night averaged just 2.8.

When the running game doesn’t work, the job gets a lot easier for the defensive line. They don’t have to worry about opening up a hole as much. They just key on getting to the quarterback. Green Bay’s defense did a decent job of doing just that with three sacks and six QB hits (ESPN).

To their credit, the Giants did a decent job of taking advantage of Green Bay’s mistakes. One interception halted a scoring drive, and another pick put the Giants in position for a field goal. They were also able to take advantage of two short fields following Green Bay punts to get within range to attempt two additional field goals.

Turnovers and their own offensive inconsistencies kept the Packers from taking advantage of the Giants ineptitude. Green Bay appeared ready to take over the game in the second half, but then Eddie Lacy went down with an ankle injury. James Starks has done well in the past, but is struggling this season and could only manage 33 yards on 12 carries.

With both of New York’s starting corners out with injuries, Aaron Rodgers should have been able to light the Giants up. Instead, he struggled in the second half with two three and outs and two field goals in Green Bay’s five second-half drives.

New York’s offense didn’t have any semblance of consistency until the final drive of the game.  The Giants used the hurry-up offense to march downfield in 10-plays and score their only touchdown on an eight-yard pass to Odell Beckham Jr. (who provided the highlight of the game when he hugged the kicking net following his touchdown).

McAdoo’s offense ended the night having generated just 219 total yards (176 net passing yards, 43 rushing). Last season, when his offense was the 8th ranked unit in the league, it averaged 372 yards a game.

What’s the problem? Well—it could be that McAdoo was able to mask the real problem last year as the team’s coordinator—Eli Manning. The last time he guided the team to a win over a quality opponent was a late season win over the Packers in 2012. Last night, he had trouble with his accuracy, timing, rushed several throws, and overthrew his receiver quite a few times. He often struggles under pressure and with a weak offensive line and no running game, he is often under pressure.

Fixing the issues may take longer than this season, but McAdoo is going to have to lay down the law soon; before his team implodes. He needs to quit talking about his players publicly, tell them not to do so, and deal with his 6’6” 329-pound tackle that likes to push around reporters in the locker room.

If he doesn’t, he may not get the chance to right what’s wrong with his team.