"Mr. Price has been given the "Billy Walters treatment" by the betting establishments in the Las Vegas area, due to his distinct ability to pick winners and cost casinos millions."
Home
Baseball
Tampa Bay Rays Moving Brad Miller To Second Base 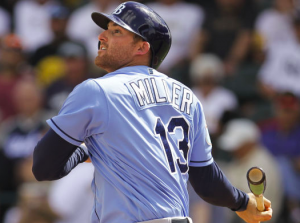 After trading Logan Forsythe to the Los Angeles Dodgers last week, the Tampa Bay Rays created a vacancy for themselves at second base just weeks before the start of spring training. But the Rays did not recklessly make the trade without some kind of plan in place for how to replace Forsythe at second base. Reports out of Tampa Bay indicate that the plan is for the Rays to move Brad Miller to second base to replace Forsythe.

Miller was previously penciled in at first base, although he’s started at least one game in his big league career at every position aside from pitcher and catcher. He has just 18 career big league starts at second base and started just nine minor league games there while coming up with the Seattle Mariners. However, Miller is a middle infielder at heart, playing shortstop for much of his minor league career. Shortstop was also his primary position with the Rays for most of last season, his first year in Tampa Bay.

A move back to the middle infield should be a welcome change for Miller. It also opens the door for the Rays to get former first overall pick Tim Beckham some time at second base to see if he can finally fulfill some of his potential. Prospect Daniel Robertson could also become an option at second base later in the season, but for now it seems like Miller will get a majority of the playing time there.

With Miller switching positions, the Rays now have a second baseman who hit 30 home runs last season, which is quite a luxury and an upgrade in power over the 20 home runs Forsythe hit in 2016. Perhaps more importantly, it creates a vacancy at first base, opening the door for the Rays to pursue one of the many first base-DH type hitters still available on the free agent market. Recent rumors indicate that the Rays are indeed interested in adding a power hitter before the start of the season.

Mike Napoli is certainly at the top of Tampa’s wish list, and while he’s likely out of their price range, trading Forsythe did free up close to $6 million in payroll, so it’s possible Tampa Bay could make a move for him. Mark Reynolds, Chris Carter, and Billy Butler are among the right-handed hitters who could fill that need, although Carter and Butler are better suited for full-time DH duty. Brandon Moss, Pedro Alvarez, and perhaps even catcher Matt Wieters are left-handed hitters who could help the Rays fill their need for a power hitter.

It may even be possible for the Rays to bring in a hitter from each side of the plate to enhance their versatility for the first base and DH spots in the lineup. Of course, this would likely force Corey Dickerson out of the DH spot and into the outfield on a regular basis, potentially forcing recently acquired speedster Mallex Smith back to the minors amidst an overcrowded outfield. But if the Rays can swing it financially, it’s an idea worth considering to help add even more power to their lineup.

In essence, the trade of Forsythe to the Dodgers and the subsequent move of Miller to second base has given the Rays an opportunity to add more power to their lineup. With so many free agents still available, and most of them likely available at reasonable prices, the Rays are in a great position and poised to add at least one power hitter before the start of spring training.