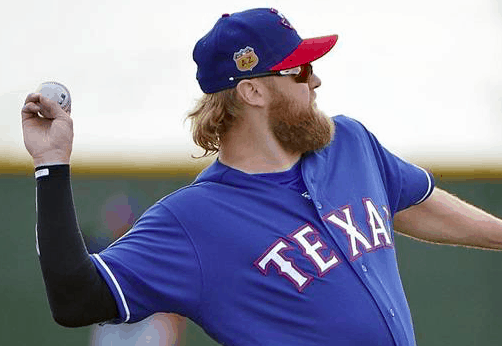 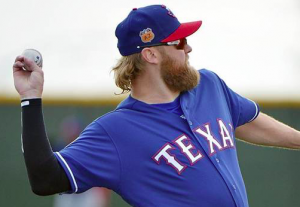 For the second time this spring, Texas Rangers starting pitcher Andrew Cashner has been shut down after an injury setback. Cashner was shut down earlier this month after experiencing soreness in his biceps. When the pain subsided, Cashner began throwing again, only for the pain to resurface, forcing Cashner back to the shelf and making him doubtful for the start of the regular season.

The Rangers signed Cashner to a one-year, $10 million this winter in hopes that he would help solidify the back end of their rotation. Of course, Cashner has not been the healthiest pitcher during the course of his career. He was limited to just 19 starts in 2014 and had two separate stints on the DL last season.

Cashner’s injury troubles this spring seem to have popped up out of nowhere. He was given a few days to rest after the soreness in his biceps first occurred. When Cashner resumed his throwing program, even without returning to the mound, the pain returned. Cashner is now likely to undergo another MRI after one last week came back negative. The Rangers will also consult with team physician Dr. Keith Meister on how to proceed with the righty.

“We tried to ramp him up, and it didn’t respond,” explains Rangers assistant GM Mike Daly. “We need to get more information on what the next steps are. It pushes back his time frame. It’s a little bit of a concern here as we get into March.”

Both Daly and Rangers manager Jeff Banister have acknowledged that the latest setback will make it difficult for Cashner to be ready for the start of the season. Cashner is yet to appear in a spring training game, and now there’s no timeline for when he’ll be ready to resume throwing, much less face hitters.

The potential absence of Cashner at the start of the season is made worse by the slow recovery Tyson Ross is making from thoracic outlet syndrome. Like Cashner, Ross signed with the Rangers over the winter. However, he’s taking things slow and is unlikely to pitch in the majors until the middle of May at the earliest.

The Rangers were hopeful that Cashner and Ross would fill spots in the back end of their rotation, but now the Texas rotation is full of question marks behind the frontline duo of Cole Hamels and Yu Darvish. Martin Perez is considered a lock for the no. 3 spot, but the final two spots are up in the air as long as Cashner and Ross are unavailable. Nick Martinez, Dillon Gee, A.J. Griffin, Chi Chi Gonzalez, and Mike Hauschild are among the candidates.

“With the number of guys we have in camp that have been working in that starter role, we have some options if we need to go down that road,” Banister says of the open spots in his team’s rotation.

The Rangers could also look into the free agent market for a more established starting pitcher if they don’t get a positive prognosis on Cashner. Longtime Texas starter Colby Lewis is still available, as is Doug Fister. Lewis made 19 starts for the Rangers last season, posting a 3.71 ERA.

There’s still no definitive word on how long Cashner will be out, but two setbacks in such a short period of time indicates that a longer recovery time may be necessary. Cashner’s absence, in addition to Ross’ delayed start to the season, give the Rangers important questions to answer with regard to their rotation between now and the start of the season.