Things Are Looking Up For Von Miller And The Denver Broncos 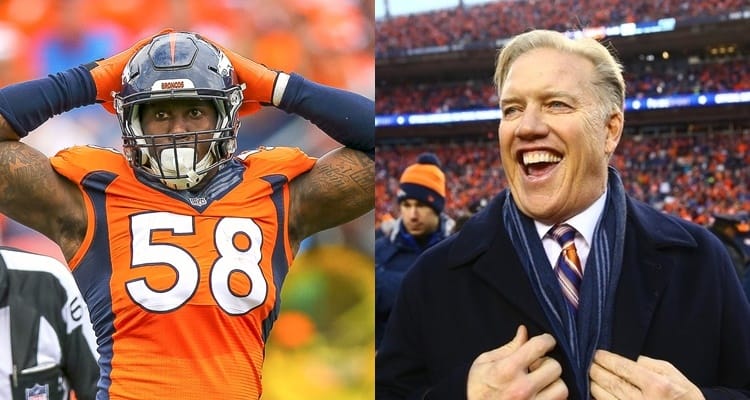 It has not been looking good for the Denver Broncos and Von Miller. It certainly didn’t look good when Miller cropped John Elway out of a picture he posted online. But fans were able to breathe easy when Miller said there was no way he wasn’t playing next year. Then he changed course and said he wouldn’t play under the franchise tag.

The two sides were not talking for quite some time, but as the deadline began to draw near signs of hope began to appear. Elway and Miller began to speak. Proposals were exchanged, but what the Broncos offered was not drastically different than what they offered before.

So it was rejected, and the talks stopped with days to go. If they didn’t start again soon, fans would have to start worrying about whether Miller would stick to his threat not to play. When he first made it, there wasn’t much reason to think he would follow through.

But in his most recent comments, there was.

“No, I’m not gonna play on the franchise tag. It just doesn’t make sense in any way,” Miller said on ESPN. “I’ve never really played for money,” Miller said. “It’s bigger than that for me. It’s a league-wide problem that I feel like I’m in a situation to help out with.”

Hmm…sounds like he might actually forego earning a small fortune to make a point about the franchise tag and how unfair it is to players.

Most people think one of the two sides will blink. There is no way the Broncos go into next season without one of their most valuable players on defense, especially considering their current quarterback situation. No way Miller passes up the chance to make $14 million.

With the deadline just hours away and getting closer, all fans could do was pray one of them blinked—and it looks like the Broncos did.

Rumor has it that the team has stuck with the six-year, $114.5 million basis of the contract, but increased his total guaranteed amount to $70 million with $59 million guaranteed within the first nine months of the deal.

Should it be legit, and should it be enough for Miller, he will become the highest paid player in Broncos history and his $70 million will be the largest guarantee for a non-quarterback and the second largest ever next to Andrew Luck’s $87 million guarantee.

Now it looks like he will not have to.

Assuming the deal is indeed true, Miller would be foolish not to take it. It is not as good as the ridiculous numbers the NBA has thrown out, but it is better than any non-quarterback has ever seen.

We’ll know by 4 PM Friday afternoon if he is going to take it.