The stage was set Sunday for what tends to happen to the Dallas Cowboys to happen once again. With Tony Romo, Dez Bryant, the left side of the offensive line, and a pair of defensive starters out, the stage was set for the Cowboys to play poorly, blame it on the injuries, and lose to a bad team like the San Francisco 49ers. 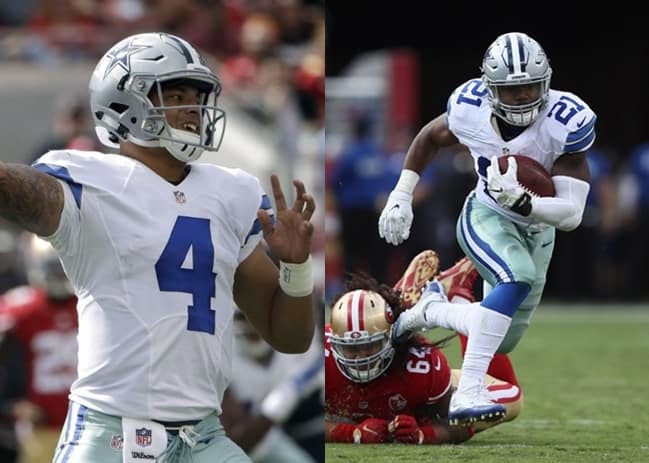 For the first quarter of Sunday’s contest it looked like the wheels were finally coming off. Dak Prescott was having trouble connecting with his receivers, Ezekiel Elliot was doing okay but he was also getting well acquainted with the 49ers front seven, and the defense was being its usual, crappy self.

This was the worst case scenario for the Cowboys. The 49ers have a good running back in Carlos Hyde and a solid front seven on defense. So they were equipped to exploit the Cowboys weak run defense and limit the Cowboys run game.

Tack on Blaine Gabbert actually connecting with his receivers and the 49ers had a 14-0 lead a couple minutes into the second quarter.

The Dallas Cowboys that took the field last season would have folded. They would have mailed it in the rest of the way, maybe closed the gap to four for a quarter before giving up three touchdowns in the fourth quarter to make the final score look really bad.

But that was then. This year’s ‘Boys are different. This year’s version has a group of players that don’t believe in throwing in the towel. No, instead, they believe in regrouping, refocusing, and overcoming whatever obstacles get in their way—and they did.

Dak Prescott started connecting with his receivers, the offensive line started doing a better job of protecting Prescott and opening holes for Ezekiel Elliot and Alfred Morris. Both did a better job of hitting the holes as well, especially after NaVorro Bowman left the game with an injury.

Elliot wasn’t doing bad when Bowman, easily the 49ers best defensive player, was in the game (11 carries for 53 yards), but in the 12 he had after Bowman left he gained 85.

There are expectations for Prescott and Elliot so it wasn’t surprising to see them step up, but what was impressive (and surprising) was how the defense stepped up. After giving up 143 yards and two touchdowns in the first quarter, the Dallas defense allowed just 152 yards the rest of the way and only three points.

Morris Claiborne even recorded his first interception since early in the 2014 season.

Dallas didn’t blow the woeful 49ers out, but the absolutely controlled the game after falling behind by two touchdowns. So what is so different about the team this year that makes this possible? It has to be more than just the rookies playing better than expected—and it is.

The Cowboys are one of the most balanced offensive teams in the NFL. So far they are running the ball 48 percent of the time and passing it 52 percent of the time. When they do either, they are doing it well. Elliot is leading the league in rushing (so far) with 412 yards. Dak Prescott isn’t lighting it up, but he is being efficient. Against the 49ers he didn’t throw the ball beyond 20 yards once. Most of his attempts were actually under 10 yards (25 of 32) as were his completions (21 of 23).

It certainly helps that the receivers are doing something with the ball after they catch it. Even though Prescott often throws passes under 10-yards, three of his top four receivers are averaging over 12-yards a catch.

Along with being balanced, they are not making a lot of mistakes. Dak Prescott has yet to throw an interception. Last season, 4.2 percent of passes thrown were intercepted. Last season they were one of the more penalized teams with 112 on the season. This year they are tied for fourth fewest with 22 and are on pace for 88 this season (Minnesota was the least penalized team in the NFL last year with 88).

Tack on Dak Prescott’s growth in just one month as the team’s starter and the stage for success is set. In Week One he had a little trouble handling the pressure and completed just one of 10 pass attempts. Since then he has gown 14-20 (NFL).

So why try to fix what isn’t broken by inserting Tony Romo in Week Eight?

Rumor has it that Romo is going to be cleared for physical activity soon, and that the team is targeting Week Eight for his return. While it is understandable to want your franchise quarterback back in the lineup, why rush him back if there is no need to?

The last time they did, he was injured in his return game and knocked out for the season. By having him return in Week Eight, the Cowboys are going to be asking him to shake off the rust against one of the better pass rushes in the NFL—the Philadelphia Eagles (tied for 9th in sacks with 10).

Why not bring him back a week later against the Cleveland Browns (tied for 24th with six sacks).

Theoretically, a guy like Tony Romo should be able to take the momentum Dak Prescott has created and run with it. Statistically, he has proven himself to be a clutch quarterback—but fans can remember the bad times too. The first time he throws an interception the masses are going to think two things: here we go again and can we put Prescott back in?