There was a point during Thursday night’s San Diego Chargers-Denver Broncos game where you couldn’t help but feel for Chargers head coach Mike McCoy. With 15 seconds on the clock and holding onto an eight-point advantage you would think the game was safe—but not for the Chargers. Three times this season they had a lead heading into the final two minutes of the game only to lose.

At that moment, you could tell that McCoy was feeling a little stressed as he wondered how the next 15 seconds were going to play out. Would history repeat itself? Did he anger the gridiron gods in some way? Are they punishing him with last minute collapses? Would Thursday night be another one of those games? 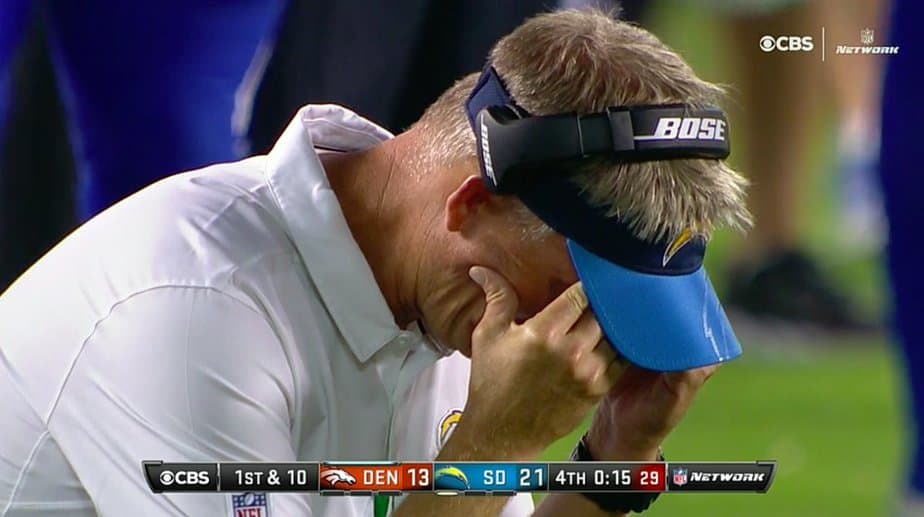 For a short time, it appeared as if it might be. After dominating the Broncos for most of the game, the Chargers started to lose their grip in the fourth quarter—but not because they were imploding as they have in other games this season. Instead, they made enough plays, minimized the mistakes, and let the Broncos do the imploding instead.

The Denver offense didn’t wake up until a holding penalty in the end zone gave the Chargers a 21-3 advantage. The Chargers muffed the free kick, and Denver recovered it around midfield. A few minutes later Bennie Fowler hauled in a five-yard pass from Trevor Siemian to close the gap to 21-10.

But with eight minutes to go, the Broncos didn’t have time to make any more mistakes if they were going to hand the Chargers another late fourth quarter defeat. Forcing a three and out on the next San Diego drive certainly helped, but then Demaryius Thomas fumbled the ball after taking a pretty hard hit.

The Denver defense did its job again and gave the ball back to the offense a few plays and 32 seconds later, but down by 11 and with no timeouts it didn’t look good. It started to look promising when the Broncos scored another touchdown, but it was called back, and they ended up having to settle for a field goal.

But then they recovered the onside kick, and Mike McCoy’s stomach started doing summersaults. Surely, it couldn’t be happening again?

Well—it didn’t. With the ball on the 46, Trevor Siemian needed to gain at least 20-yards for Brandon McManus to have a reasonable shot at making a long field goal. But the San Diego defense toughened up when it needed to the most for the Chargers first division win in two years.

The win also brought an end to Denver’s 15-game road win streak in the division.

When the Broncos were down by 18-points and needed to gain chunks of yards, they couldn’t. Whether it is because Trevor Siemian can’t throw downfield or they have no confidence in his ability to do so, not even trying to made it harder for the Broncos to complete the comeback.

Of course, it might help if the Broncos had any kind of running game to speak of, but so far this season they have been terrible running the ball. C.J. Anderson managed only 37 yards on ten carries, and Devontae Booker had 46 yards on five carries (ESPN).

To be fair, it is not unusual for new starters to struggle a little when it comes to throwing downfield. Denver is probably counting on the defense to keep them from getting in that position, and with the exception of two 75-yard drives to start the game the defense did its job. After those first two drives, they only allowed the Chargers to gain another 115 yards during the remainder of the game.

But since the Denver offense was not able to play the field position game (and get a first down or two) the Chargers often didn’t have far to go to score.

Maybe if the Broncos had their head coach on the sideline instead of watching the game from home because of a health issue, Kubiak could have diagnosed whatever the issue was and corrected it—but Denver’s problems go beyond the presence of their head coach.

They came into the season expecting to ride their defense while the Trevor Siemian led offense did enough to win. However, since teams know they don’t have to worry about the Denver rushing game, they can focus on stopping Siemian and the passing game.

If Siemian was an elite talent that wouldn’t be a problem, but he’s not—and it is a problem.

Denver will try to get back on track with a trip to Houston on Monday Night Football next week. San Diego will try to make it two in a row next week when they face the Falcons.