If there is a lesson the Jacksonville Jaguars can take away from the 2016 season, it is that you can’t buy your way to becoming good. After watching Allen Robinson and Allen Hurns explode last season, the focus in the offseason was on improving the running game and defense. So they went out and spent $224.5 million on free agents and took almost nothing but defensive players in the draft (and former Arkansas quarterback Brandon Allen in the 6th round)—and they still stink.

It’s a fact that was evident when they took on the Tennessee Titans on Thursday Night Football. 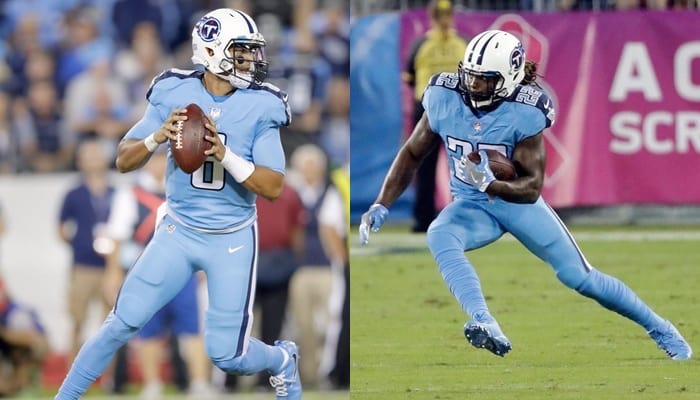 But the score was 36-22? That doesn’t sound too bad. That’s only because the Titans took it easy on the Jaguars in the second half—especially during the fourth quarter.

At the half, the score was 27-0, and the Jaguars had gained all of three first downs and 60 yards. Tennessee punted on their first possession of the game but didn’t do it again until late in the third quarter (six straight scoring drives; 354 yards in the first half).

Marcus Mariota and DeMarco Murray were simply too much for the Jaguars to contain. Mariota had a near perfect day completing 18 of 22 passes for 270 yards and a pair of touchdowns. Murray paved the way for the running game with his best performance of the season, 123 yards and a touchdown on 21 carries.

It was Murray’s fourth 100+ yard game of the season and his third in the last four games.

Neither played in the fourth quarter.

For Jacksonville, it was more of the same. Blake Bortles led the team in rushing for the third time this season with a whopping 22-yards. If he was like Russell Wilson, Tyrod Taylor, or Cam Newton that would be no big deal—but he’s not! His passing totals ended up looking good (33-54 for 337 yards and three touchdowns), but most of it came in garbage time.

It might help the running game a little if the team would give it just a smidgen of commitment. Between Bortles, T.J. Yeldon, and Chris Ivory, they ran the ball a total of 11 times—and only seven times by the running backs. The only game in which a Jaguars running back received 20+ carries was the season opener against Green Bay (Yeldon, 21 carries for 39 yards).

When asked about the team’s struggled after the game, Bortles was clearly frustrated in his response:

After the loss to Oakland last week, team owner Shahid Khan met with the players to ask why the team wasn’t winning and what could be done to fix that. It would be easy to say they need better players, and in some respects, they do. However, with all the additions that were made during the last offseason, you have to wonder about the coaching staff and front office.

It’s certainly discouraging when the head coach admits he doesn’t know what to do. In spite of his inability to figure out what to do with his team during his fourth season, he is confident that he’ll still be on the sideline next week.

It almost makes you wonder what he does know.